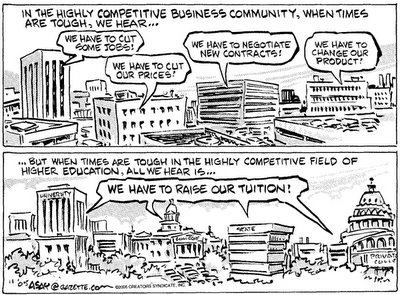 Imagine for a moment a higher educational system that actually used good business practices and was responsive to their customers.

A place you could send your children knowing that they were being taught to think--not what to think.

A place were good teachers were rewarded and the bad weeded out; and where there are no ideas that are prohibited from discussion and evaluation.

A place where even Republicans and conservatives (curse them!) would be welcome to express their ideas! And all that mattered would be the quality and rationality of the idea --not the political party of the person expressing it.

Where the only "conformity" encouraged was conformity to reason and reality (how bourgeoise and unpostmodern!)

But...no. They are far too superior to be held to such a capitalistic standard. Besides they see it as their job to tell their customers what to think (or at least, the children of their customers).

Our institutions of higher learning might actually be dedicated to thinking--instead of holy temples of political correctness and multicultural indoctrination. Intellectual "diversity" and open debate would be encouraged, instead of conformity.

Of course there might still be a niche market where professors like Ward Churchill and this one, could act out their pseudointellectual power ambitions and intimidate or suppress any "deviant" thoughts that might emanate from the young minds foolishly sent their way.

Capitalism in higher education. What a concept!
Posted by Dr. Sanity at 10:50 PM