When one talks about hysteria--particularly the conversion type as I have written about here) there is offen a rather inappropriate lack of concern expressed by the patient about the very symptoms that have brought them to see you in the first place. This phenomenon is referred to as "la belle indifference", literally, "beautiful indifference."

Let me give you an example from one of my own cases. A middle-aged woman was referred to the psychiatric emergency room when a rather thorough medical examination could not explain the sudden onset of a complete paralysis below the waist. Additionally, the Resident was concerned because her "affect" was rather strange. It seems that, despite what one might normally consider a rather devastatingly traumatic event--the loss of one's ability to walk or to experience any sensation below the waist--the patient was laughing and joking with the medical Resident.

Mrs O'Hara (we will call her that for reasons that need not concern you) was indeed cheerful for someone who was suddenly paralyed and in a wheelchair. She was also not particularly concerned that she had been referred to a psychiatrist. "Oh!" She told me cheerfully when I asked her how she felt about it, "I suppose you will all sort it out after a while!"

As it turned out, Mrs. O'Hara was eventually admitted to our inpatient unit (yes, they actually used to admit patients like this back in those days). I did not follow her closely, but it turned out that her husband of many years had recently left her for a much younger woman. They were in the middle of a nasty divorce, fighting over how much money she was to get. The whole situation would have been quite upsetting to anyone, but Mrs. O'Hara insisted it didn't bother her at all--and as long as she insisted such was the case, she was unable to use her legs. She literally "couldn't stand on her own two feet" and didn't seem to much care ("la belle indifference") until one day in a family meeting where her soon-to-be-ex-husband was also present. During this session, Mrs. O'Hara became enraged at something he said and suddenly stood up to confront him angrily. This seemingly obvious evidence of the health of her legs completely unfazed her, however, and she regained her good humor--and her paralysis--at about the same time.

I tell this story merely to demonstrate "la belle indifference" and to segue into a discussion of the curious, but beautiful indifference of our own Mainstream Media.

Curiously, because they are journalists, and I would think that journalistic instincts are easily aroused by curiosity, the crop of journalists we must deal with today seem to be suffering from a form of mass hysteria. Their journalistic insticts; their curiosity; their "nose" for a story has been severely impaired--almost paralyzed you could say, and they don't much seem to care!

Here is a partial listing (in no particular order) of what the media is Obsessed by (on the LEFT) , compared to what they appear Indifferent to (on the Right): 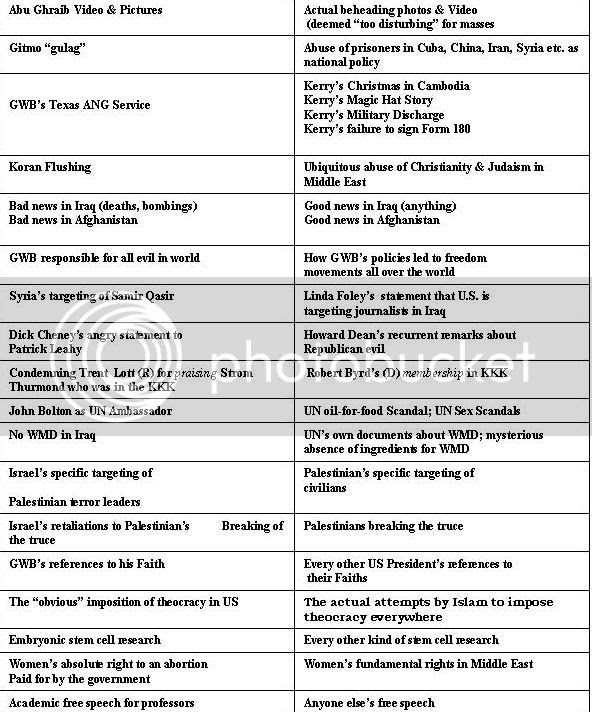