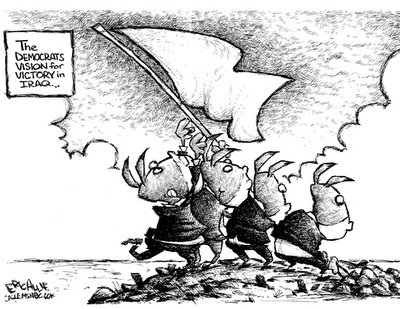 John O'Neill has an excellent article up at RCP on "Summer Soldiers".

Senator Kerry, supposedly defending Rep. John Murtha, said, "I won't stand for the Swift-Boating of Jack Murtha!" As one of the 254 members of Mr. Kerry's unit in Vietnam who belonged to Swift Boat Veterans and POWs for Truth, I found Mr. Kerry's comments most ironic.
[....]
To us, Mr. Kerry's comments meant that no one should do to Mr. Murtha that which Mr. Kerry did to all of us and our fellow Vietnam veterans, living and dead. Mr. Kerry's disgraceful comments on many occasions in 1971 (while we were locked in combat), claiming falsely that we were "murdering" hundreds of thousands of Vietnamese and committing rape and mayhem on a daily basis, are a part of the public record for which he has never apologized. This might be called "Kerrying" our soldiers.

In his own strange way, in his recent comments, Mr. Kerry was trying by implication to compare himself to Mr. Murtha - the gravest of insults to Mr. Murtha, who was given a standing ovation by the House of Representatives (which then properly buried his immediate pullout suggestion 403-3). Mr. Murtha's long military record stands in stark contrast with Mr. Kerry's continuous self-promotion of his short and controversial service in our unit. More importantly, Mr. Murtha has never compared our troops in the field - now or then - to the "Army of Genghis Khan" or claimed our adversaries, whether the bloody communists and Khmer Rouge or the butchers of Al Qaeda, were simply democratic reformers.

Kerry, along with his fellow Democrats are desirous of snatching defeat from the jaws of victory. The kindest explanation for this is that they are all a bunch of idiots.

If I were less kind, I might remark that this attitude is extremely ironic, particularly now that the fledgling Iraqi government sees an end in sight for American troops in Iraq, that the desperate Democrats' motivation for such idiotic behavior has to do with their intense need to discredit President and his "quagmire"-- no matter what the cost to America or the troops-- for their own political gain.

No one in the U.S.-- or in Iraq-- wants an interminable occupation. But despite what the Democrats would have you believe, neither the Iraqi people nor the American troops fighting there for democracy and freedom, believe that the battle is hopeless or unwinnable. In fact, many believe that troops will be able to come home in the next year.

But as Mark Steyn puts it so clearly and bluntly:

Happily for Mr Zarqawi, no matter how desperate the head-hackers get, the Western defeatists can always top them. A Democrat Congressman, Jack Murtha, has called for immediate US withdrawal from Iraq. He's a Vietnam veteran, so naturally the media are insisting that his views warrant special deference, military experience in a war America lost being the only military experience the Democrats and the press value these days. Hence, the demand for the President to come up with an "exit strategy".

In war, there are usually only two exit strategies: victory or defeat. The latter's easier. Just say, whoa, we're the world's pre-eminent power but we can't handle an unprecedently low level of casualties, so if you don't mind we'd just as soon get off at the next stop.

Demonstrating the will to lose as clearly as America did in Vietnam wasn't such a smart move, but since the media can't seem to get beyond this ancient jungle war it may be worth underlining the principal difference: Osama is not Ho Chi Minh, and al-Qa'eda are not the Viet Cong. If you exit, they'll follow. And Americans will die - in foreign embassies, barracks, warships, as they did through the Nineties, and eventually on the streets of US cities, too.

And when we do finally hand over all aspects of security to the Iraqis in the not too distant future, I simply can't wait to hear the Democrats rush to take credit for the Bush Administration's incredible successes in Iraq (and Afghanistan and the Middle East in general)and for the unprecedently (and historically) low level of casualties. They voted for the war, you know, before they voted against it.

Failure is an orphan, but success has many fathers.

WHEN IT COMES to the future of Iraq, there is a deep disconnect between those who have firsthand knowledge of the situation — Iraqis and U.S. soldiers serving in Iraq — and those whose impressions are shaped by doomsday press coverage and the imperatives of domestic politics.

A large majority of the American public is convinced that the liberation of Iraq was a mistake, while a smaller but growing number thinks that we are losing and that we need to pull out soon. Those sentiments are echoed by finger-in-the-wind politicians, including many — such as John Kerry, Harry Reid, John Edwards, John Murtha and Bill Clinton — who supported the invasion.

Yet in a survey last month from the U.S.-based International Republican Institute, 47% of Iraqis polled said their country was headed in the right direction, as opposed to 37% who said they thought that it was going in the wrong direction. And 56% thought things would be better in six months. Only 16% thought they would be worse.

American soldiers are also much more optimistic than American civilians. The Pew Research Center and the Council on Foreign Relations just released a survey of American elites that found that 64% of military officers are confident that we will succeed in establishing a stable democracy in Iraq. The comparable figures for journalists and academics are 33% and 27%, respectively. Even more impressive than the Pew poll is the evidence of how our service members are voting with their feet. Although both the Army and the Marine Corps are having trouble attracting fresh recruits — no surprise, given the state of public opinion regarding Iraq — reenlistment rates continue to exceed expectations. Veterans are expressing their confidence in the war effort by signing up to continue fighting.

Now, it could be that the Iraqi public and the U.S. armed forces are delusional. Maybe things really are on an irreversible downward slope. But before reaching such an apocalyptic conclusion, stop to consider why so many with firsthand experience have more hope than those without any.

As a professional who deals with delusions all the time, I have to give somewhat more credence to people who know what they are talking about; rather than people whose conscious or unconscious agendas depend on the U.S. losing in Iraq. The latter group is responding to internal stimuli, not to reality.
Posted by Dr. Sanity at 10:37 AM