A POLITICAL NARRATIVE - With Cartoons! ** 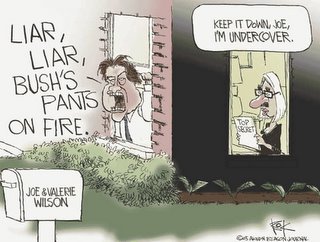 Once upon a time a very ordinary couple lived very quietly while working for a very very secret agency in the US government. Their one wish in life was to continue to live their lives quietly and remain undisturbed by the media or politics; just doing their important work the best way they knew how.

Meanwhile, the Democratic Party, after losing two national elections, was hopelessly adrift and out of any ideas as to how to cope with the world, which was becoming decidedly complicated and difficult. Most of their passion was directed at hating the President and his party for making them, literally, losers.

One day, while searching desperately for an agenda they could wholeheartedly support, the Democrats received a subtle, yet heartfelt call from the quiet, secret couple, who instinctively seemed to understand their dilemma, and wanted to come to the aid of their party. 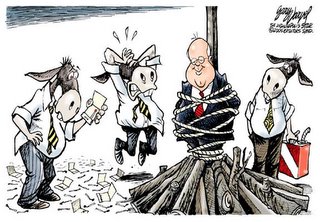 The quiet couple who wanted to stay out of the media spotlight offered the perfect agenda! It had the potential to totally disrupt the Bush White House, and take down the one man who they believed stood squarely in the way of their attempt to regain power.

It seemed too good to be true! Their joyful anticipation of success was almost too much to contain as they carefully prepared for the witch burning that would result from information provided by the the quiet couple. If only that son of a witch Rove could be burned at the stake, all their troubles would be over!

But it was not to be! Their carefully laid plans could not be consummated after all. 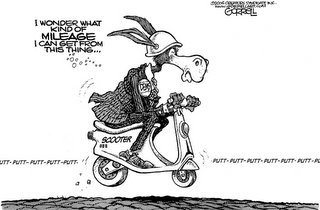 After a brief retreat to regroup, it was decided they would simply have to make do with whatever milage they could get out of the indictment of a lesser mortal.

They had tried to trap an elephant, and captured only a mouse instead. 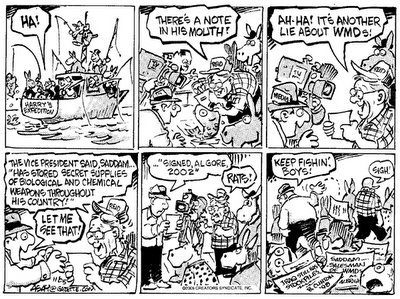 Right back where they started, the Democratic leadership decided to go on a fishing expedition.... 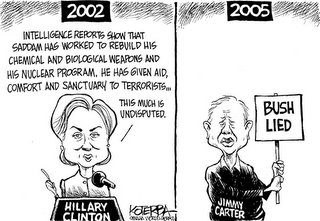 ....still looking for a slogan that would resonate with their deeply held core beliefs and, of course, their extremely patriotic desire to keep this country safe from terrorism--particularly when such a position was politically advantageous.... 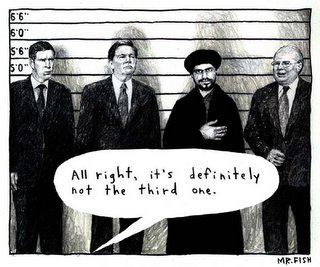 They knew in their heart of hearts, that the real threat to civilization was not terrorism, but the Bush Administration itself! 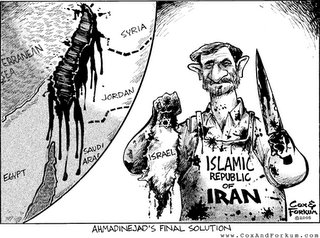 And, while the Dems posture and rewrite history, another member of the "Axis of Evil" begins to take center stage....

Perhaps the secret, secret agency could ask the quiet couple to make some inquiries and clear this up for us?
Posted by Dr. Sanity at 9:53 AM