The Glass is Always Half Full

There is likely a strong biological component to both optimism and pessimism. There are pros and cons to both styles. Optimism taken to expremes can represent a denial of reality and unacceptable pain. Pessimism taken to extremes leads to depression and self-fulfilling prophecy because it focuses only on the negative and see catastrophes everywhere. Further, pessimism and its partner hopelessness, can sap the will and prevent the individual from taking those steps necessary to achieve success, and thus ensures failure. 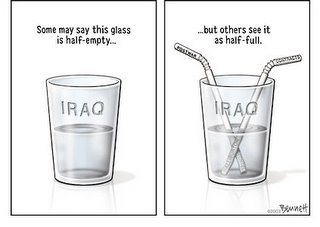 But the pessimists here in our own country would have us pack up and go home without completing the job; abandoning the Iraqis and the future that they are now able to see clearly. The pessimists are perfectly willing to embrace failure even now--when the odds of success have consistently been on the rise.

The way of the optimist is to persevere and keep the eyes on the prize (an Iraqi Democracy in the Middle East). Failure to achieve our strategic goals may in fact result from our efforts, but it is most certainly not a given. And there is ample evidence after two major democratic votes in the face of threatened terrorism, that the Iraqi people are predominantly optimistic about their chances. This optimism is also present in the military personnel who work every day with the Iraqi people. They can see the positive impact of their efforts, and thus their optimism is reinforced.

It might be cynically argued that the Democrats' and Left's overwhelmingly pessismistic vision and hopelessnes regarding both Iraq and the war on Islamofascism in general, is based on their optimism that taking the low road and undermining President Bush and his Administration will bring them back to power in American politics.

I remain optimistic that this will not be the case.

UPDATE: One Marine's perspective about the Iraq War contrasts with the perspective the Press want to present:

One Marine, Sgt. Todd Bowers, who did two tours in Iraq, described the attitude of many press types. "They didn't want to talk to us." Why? I asked. "Because we were gung-ho for the mission." Bowers, who was saved from grievous injury when a bullet lodged in the sight of his rifle (a sight his father had purchased for him), is chary about the press.

In his first tour, he noticed that members of the press were reluctant to photograph Iraqis laughing, giving the thumbs up sign, or cheering. Yet Bowers saw plenty that would have made fine snapshots. In Baghdad, Al Kut and Al-Nasiriyah, Bowers reported no signs of anti-American feeling at all among Iraqis.

Fallujah, of course, was different, as the city was a hotbed of terrorism, and the battle of Fallujah was one of the fiercest engagements of the war. During the battle, Bowers found himself sharing a ride with an embedded reporter for the AP. He was asked what he thought of the destruction. Bowers responded that it was "Incredible, overwhelming. But it definitely had to be done." He also stressed that because the enemy had fought so dirty, tough calls had to be made. Later, he saw himself quoted in newspapers around the country to the effect that the destruction was "overwhelming" as if he could not cope