With the classic narcissist, language is used cruelly and ruthlessly to ensnare one's enemies, to sow confusion and panic, to move others to emulate the narcissist ("projective identification"), to leave the listeners in doubt, in hesitation, in paralysis, to gain control, or to punish. Language is enslaved and forced to lie. The language is appropriated and expropriated. It is considered to be a weapon, an asset, a piece of lethal property, a traitorous mistress to be gang raped into submission. --Sam Vaknin, author, Malignant Self Love.

Pathological lying is one of the hallmark characteristics of a narcissist, who does it out of a need to manipulate and maintain control. For the immature narcissist there is an essential emotional truth: lying is an expression of his (or her) mistrust of others; and his (or her) need to maintain a fragile sense of self at all costs.

Being honest (and therefore vulnerable) terrifies the narcissist. Since his primary goal is to control others, through projection he constantly fears that others will try to control him. Thus, lying becomes the modus operandi through which he can maintain his superficial presentation of himself and keep people from learning the truth of who he really is. He never allows himself to be "pinned down", or accountable. More lies are always necessary to cover up a previous lie. And typically, he even begins to believe his own lies and become outraged at any suggestion that he may be lying. Thus he becomes sincere in his lying and others may actually believe the lies because of the sincerity. This is why truly pathological liars (such as sociopaths) are so hard to detect in the population. In general, the lack of an ability to feel guilty about the lies, and the perverse sense that he is "entitled to lie" are standard for the political narcissist.

Having said all this, it is important to remember that lying, no matter how pathological it may be is not in itself a disease. EVERYONE LIES. Most psychological tests have built in scales that detect this tendency to make one's self look better to others.

When you combine an overwhelmning need to make one's self look better (i.e., superior) with a grandiose sense of self-worth; throw in glibness and a superficial charm that easily convinces others of your sincerity; then there is little to stand in the way of easily manipulating others to your will. Of course, it behooves you to also throw into the mix that whatever you do, you do it for the sake of others. Children are a good standby (as in, "do it for the children!").

Let me refresh your memory about some basic psychological defense mechanisms.
Denial, which is an immature defense is defined as an attempt to reject unacceptable feelings, needs, thoughts, wishes--or even a painful external reality that alters the perception of ourselves. This psychological defense mechanism protects us temporarily from:
-Knowledge (things we don’t want to know)
-Insight or awareness that threatens our self-esteem; or our mental or physical health; or our security (things we don't want to think about)
-Unacceptable feelings (things we don’t want to feel)

One type of denial is Repression , a neurotic defense characterized by a seemingly inexplicable naivete, memory lapse, or lack of awareness. Repression is often dismissed as an artifact of diminished attention by cognitive psychologists, but I find that it almost always reflects a rather creative method to resolve some inner conflict for the person who uses it. With repression, affect is out in the open, but the associated idea is out of the mind and unavailable to consider. Someone who has repressed some knowledge may be genuinely astonished that anyone would consider them to have deliberately ignored the issue.

The "forgetting of repression is different from ordinary forgetting in that there is often some sort of parallel symbolic behavior that goes along with it.

Most often repression is associated with histrionic traits. A typical example might be the doting and dutiful wife who remains blissfully unaware of the husband's constant philandering--although the evidence is obvious to everyone else; and she may not understand why she feels anger at her spouse. She may defend him passionately from his accusers, but the anger will find a way to express itself in various ways within their relationship. Or, another example is a devoted public servant and leader of the Party, whose behavior in a recent press conference raised red flags in almost everyone who was watching and listening to her.

Neo-neocon captures the essence of her psychological dilemma, on view for all to witness:

Some people have asked why Pelosi hasn’t just said, “Look, at the time of the briefings I thought waterboarding was okay, but now I see the light and I’m against it.” Such a statement would have arguably gotten her in a lot less trouble than the course she’s taken instead: a series of ever-changing and hedgy excuses that read as lies, culminating in her making accusations against the CIA that have roused its formidable defenses against her.

I don’t think Pelosi is stupid, although I agree with almost nothing she stands for or says. She has shown great political savvy and cunning in her long career. Why does it appear to be deserting her now?

I see Pelosi as having been put between a rock and a hard place by Obama’s release of the “torture memos” and the resultant brouhaha. If she were to make the statement I posited in the first paragraph of this post, she would be admitting something that would contradict the entire Democratic Party “narrative” of the Bush administration’s decisions regarding terrorists.

Going that route would destroy the tale the Democrats have ridden to victory and power: that the Bush administration was evil, lying to us (rather than sometimes mistaken), trampling on liberties for the sake of power and even sadism. How can Democrats contradict themselves by acknowledging now that nearly all of Bush’s decisions in the war on terror were arrived at after due deliberation, analysis of the best information available at the time (the conclusion that Saddam Hussein possessed WMDs would be a prominent example), acting in the best interests of our country, and with an effort to preserve as much liberty and protection as seemed possible?

For Democrat leaders to do so would be to undercut their own story about Bush, which was (and remains) vital to their own success.

So, we might reasonably conclude that Nancy's "surprise" in discovering that she was actually briefed by the CIA on its enhanced interrogation techniques, including waterboarding, is an example of:

Of course, it could well be a vast rightwing conspiracy to take down the poor, hapless Speaker. But I rather suspect it is the Democrats' own neurotic conflicts coming home to roost (to coin a phrase.)

Neurotic defenses may be used by all sorts of otherwise intelligent people; and in this case, the willingness to believe anything that is said--especially when it is said by a Democrat (no matter how obviously ridiculous); while sneering and demeaning anything said by a Republican (no matter how true or obvious) suggests an underlying neurotic conflict.

Perpetual Displacement, anyone? Poor Obama "can't turn the page" on Bush? Or, is it that Obama and Co. are unable to turn that page because their entire success and current power grab depends solely on this bizarre neurosis of theirs?

There are narcissists and liars in both parties, of course; but Nancy Pelosi's rather blatant attempts to play fast and loose with the Truth, even as she loudly demands "Truth Commissions" is nothing more than the extreme narcissism and pathological lying that is peculiar to politics. Victor Davis Hanson is amazed that she--and Democrats, in general--seem not to believe in the god Nemesis:

There is an odd sense among Democrats that nemesis simply does not exist.

A once-vein-bulging Al Gore who barnstormed the country slurring President Bush by calling him a liar now seems baffled about the precedent he set of a vice president (albeit now much more politely in the case of Cheney) questioning the policy of the current president.

A Nancy Pelosi, hellbent on releasing once-classified memos for partisan advantage, and eager to begin 'Truth" hearings, suddenly believes such an inquisition will not apply to herself, despite the fact that she, like so many Democrats from Senator Schumer to Senator Rockefeller, in that dark period in 2001, spoke of the need for, or was complicit in, approving enhanced interrogation techniques.

Then the president himself, who jump-started his campaign in Iraq's crisis year by slamming the commander-in-chief on renditions, military tribunals, email and phone intercepts, Predator drone attacks, and Iraq, now suddenly wishes to explain the nuances and complexities of these policies and why he will continue the Bush protocols — apparently oblivious to the hypocrisy involved with his own prior self-interested stridency. These examples could be easily augmented.

To explain their behavior, Hanson invokes the deity in charge of just consequences--Nemesis; but I would account for it by pointing out the self-satisfied smugness and narcissism of Democratic leaders who pathologically are unable to believe that reality and truth have any hold on them. In psychiatry, we call this delusional.

And the leaders of the Democratic Party (including the Great, Supreme Poobah Messiah) demonstrate their delusional and narcissistic credentials on a daily basis. 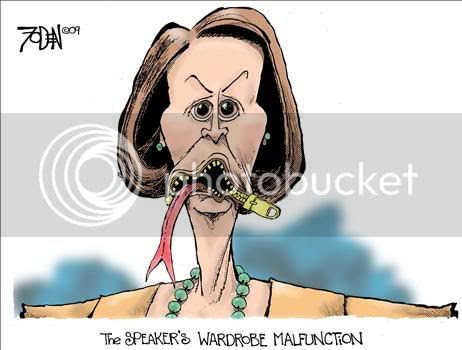 Do you have the guts to apply your theory to Mr. Romney?

Do you have the guts to apply it to Mr. Obama? I don't think so. And his pathological lying is not even in question now that people are actually reading his book and vetting him.

Do you have the scientific integrity to apply your theories to Mr. Romney? Or, is this article basically an intellectual attack piece based on your opinion of who would be a better president?