PROFILES IN INTELLECTUAL AND MORAL BANKRUPTCY

Posts in this series are meant to be companion pieces to this earlier essay on The Intellectual and Moral Bankruptcy of Today's Left.

#1 KOFI ANNAN AND THE UN

Here is Kofi Annan in a editorial written for the Washington Post in June, 2005:


Today I am traveling to Brussels to join representatives of more than 80 governments and institutions in sending a loud and clear message of support for the political transition in Iraq.

A year ago, in Resolution 1546, the U.N. Security Council set out the timetable that Iraq, with the assistance of the United Nations and the international community, was expected to fulfill. The Brussels conference is a chance to reassure the Iraqi people that the international community stands with them in their brave efforts to rebuild their country, and that we recognize how much progress has been made in the face of daunting challenges.

You might be forgiven if you got the impression from reading his editorial, that the UN was solely responsible for the liberation of Iraq and the recently completed democratic elections there in January. Yet, Annan and the UN, who ignored the suffering of the Iraqi people for years; while he and his cronies profited off of it by overseeing the greatest financial scam in human history--the Oil-for-Food scandal. As this scandal continues to unfold, one thing is perfectly clear: Annan's corruption and incredible mismanagement are responsible for the decade-long suffering of Iraqis that he casually blames on the U.S. He and many others of UN officialdom totally opposed the liberation of Iraq, and actively worked to undermined Coalition efforts to rebuild the country. As soon as they were threatened with violence from terrorists; the UN departed Iraq. Yet, from his comments above, he has no problem taking full credit for the transformation of Iraq from brutal dictatorship to nascent democracy. He does not even mention the US in his comments.

This same pattern can be found in the response to the Tsunami. The US responded; the UN and its officials arrived in time to take credit for the US efforts in helping those afflicted.

Or, how about this breathtaking example described by Polipundit.

Amidst a new odious crackdown on dissidents in Cuba, Libya being elected to chair the UN’s Human Rights Commision, and other outrageous developments, Kofi Annan is concerned about human rights violations by … the United States!

Finally, although Annan with regularity espouses his concern for "human rights", consider this excellent point:

[The]U.N.'s failure to prevent human-rights atrocities in states such as Rwanda, Bosnia, and Kosovo, where the veto power of Security Council members created inertia and cowardice. In Sudan, an Islamic government stands accused of ongoing genocide--with no clear sign that the U.N. will intervene. Without a hint of irony, Annan asked the General Assembly: "As to genocide, ethnic cleansing, and other such crimes against humanity, are they not also threats to international peace and security, against which humanity should be able to look to the Security Council for protection?"

Meanwhile, such stalwarts of human rights such as Sudan, Libya, Cuba, and others compose the UN's Human Rights Council.

Kofi Annan basically symbolizes the complete and indisputable intellectual and moral bankruptcy of the United Nations.

#2 HAROLD PINTER - nobel laureate in Literature (2005); noted pacifist and anti-American. Mr. Pinter has never met a dictator that he didn't love. You would think that a pacifist (if there is to be any meaning of this word) would at least mildly disapprove of mass murderes, yet since the 1980's, Pinter has been remarkably consistent in the company he keeps. From David Pryce-Jones:

- He lavishly praised Ayatollah Khomeini at a dinner party.

-he described the United States as "arrogant, indifferent, contemptuous of international law . . . the most dangerous power the world has ever known." The murderers of 9/11, he also said, were engaged in "retaliation." (That same summer, Lincoln Center in New York was putting on a festival of his plays, and hatred of America did not oblige him to reject his royalties.) During the last three years, he has been spouting about the iniquity of the Iraq War and Saddam's overthrow, thus helping to align the Left behind another monstrous dictator.

- from a letter Pinter wrote to the editor of the Guardian in November, 2003: "Dear President Bush, I'm sure you'll be having a nice little tea party with your fellow war criminal, Tony Blair. Please wash the cucumber sandwiches down with a glass of blood, with my compliments."

Other comments by Mr. Pinter:

December 2002 - Pinter: "Earlier this year, I had a major operation for cancer. The operation and its after effects were something of a nightmare. I felt I was a man unable to swim bobbing about under water in a deep dark endless ocean. But I did not drown and I am very glad to be alive.

However, I found that to emerge from a personal nightmare was to enter an infinitely more pervasive public nightmare - the nightmare of American hysteria, ignorance, arrogance, stupidity and belligerence; the most powerful nation the world has ever known effectively waging war against the rest of the world.

"If you are not with us, you are against us," President George W. Bush has said. He has also said: "We will not allow the world's worst weapons to remain in the hands of the world's worst leaders." Quite right. Look in the mirror, chum. That's you.

America is at this moment developing advanced systems of "weapons of mass destruction" and is prepared to use them where it sees fit. It has more of them than the rest of the world put together. It has walked away from international agreements on biological and chemical weapons, refusing to allow inspection of its own factories. The hypocrisy behind its public declarations and its own actions is almost a joke.

No, Mr. Pinter, you are a joke. You are a person who professes to believe in "peace", yet you made no comment when Saddam was killing his own people. You are a person who professes "peace", yet you made no comment when Milosivic engaged in genocide. You are a person who claims to be morally superior to the rest of us mere mortals, yet you did nothing as the Taliban destroyed the people and the heritage of Afghanistan. You do nothing except to fling your vile hatred toward the one power in the world that has taken on those who defile the very meaning of the word "peace". Whatever the philosophical foundation on which you base your rhetoric--it is both intellectually and morally bankrupt.

A group of students from Tehran University recently wrote a letter to Mr. Pinter pointing out his hypocrisy in stark terms. They expose his moral bankruptcy much better than I could (hat tip: Jeff @ Beautiful Atrocities):


Harold Pinter won the Nobel Prize for literature for this year (2005). In his speeches that he delivered at various places, including Turin University , he lashed out at the American foreign policy. He gave those speeches after he had undergone a major operation for cancer. If we do not take his speech as delirium of a sick man still under the influence of medications, then it should be considered as a show of human indecency and deceitfulness. Afraid of seeing the truth, Printer tries not to look at it. It seems that for some people, as long as their lives are cushy, the rest don’t matter.

Mr. Pinter blamed America for the London bombings of 7/7. He believes that the attacks were the consequence of American foreign policy. His argument is that if America had not attacked the Taleban, Al-Qaida would not have bombed London .

The crux of the speech of Mr. Pinter was: Why should we be concerned about the plight of people in other countries? Who cares if some thugs in other parts of the world slaughter other people? It is none of our business if a mad man like Saddam Hussein kills millions of his own people, invades his neighbours, gasses multiple villages, and massacres thousands of innocent children. What does it have to do with us if the Taleban maim the fingers of an eight year old girl for the crime of decorating them with dahlia flowers? Why should we give a damn if in 1986 thousands of political prisoners in Iran were executed during a single night? Should we do anything when the Iranian authors and artists are kidnapped in the streets and a few days later their mutilated corpses are found dumped in the outskirts of Tehran ? Why should the Europeans care if millions of Iranians leave behind their loved ones, risk their lives and escape the country to seek refuge in other countries because their lives are threatened? Why should it be important to us if the Islamic police (guards) rape underage girls before they execute them the next morning? It is probably their custom! The important issue here is that London should not be bombed.

Read it all and see how a "compassionate" Leftist deals with oppression in the world today. Undoubtedly, Pinter would find no problem in supporting Adolf Hitler if he existed today--so complete is his self-loathing and denial of evil.

Photos are from Zombie. Their website is here --not that I recommend you bother to visit, but if you want to see the hatred and fanaticism underlying some of the Left today, this is as good a site as any. They have a list of their contributors on the front page--among them are extreme leftwing looney types (of the ANSWER and Socialist moonbat variety--they even proudly display Harold Pinter's name!) as well as religious organizations and some well-respected individuals who have permitted their name to be used in this kind of Carnival of Hate. They are under the delusion they are supporting "peace." 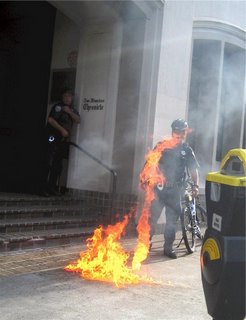 Here is an example of their idea of "PEACE" - they threw a Molotov coctail at the police. 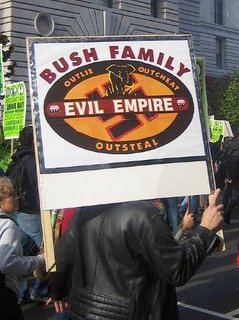 Here is an example of their idea of an "EVIL EMPIRE" 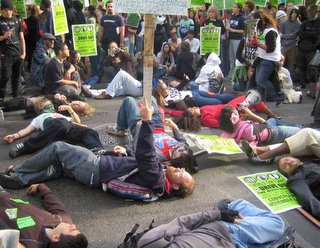 Here and here are examples of REAL "evil empires", but don't tell our lame protestors for peace that, because then they would actually have to do something in the real world. As Zombie comments, "An enthusiatic die-in also failed to topple the Bush regime, to everyone's bewilderment. "

This, I submit to you, is a movement that is so divorced from reality as to be amazingly unaware of their own intellectual and moral bankruptcy.

TO BE CONTINUED..... There are so many examples, I hardly know where to begin; but I will continue to present the most egregiously bankrupt individuals and groups as they intrude on my consciousness--feel free to suggest other examples in the comments. This will be the first in a series.
Posted by Dr. Sanity at 3:23 PM