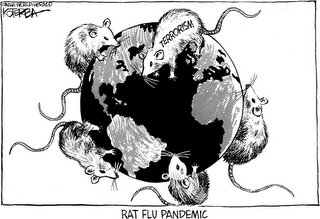 On the one side are the protester-arsonists, many if not most of them Muslim, whom the Interior Minister called racaille (rabble)--young, restless, violent, vibrant, angry, jobless, envious and fecund. And on the other side is an aged and exhausted civilization, the hollowed-out core of European Christendom, static, aging, contented, coddled, passive and literally without faith. Who would you think will win in the end?
[...]
France always thought it had one last resort, one ready strategy for fending off the rage of its Arab street: beyond avoidance lay appeasement. No country in the West has done more to cultivate world Arab opinion, to appease Arab terrorists, to ostentatiously oppose American Middle East policy (Iraq above all), to champion the signal Arab cause of Palestine. It was no accident that Yasser Arafat chose Paris as his place to die--Paris, after Jerusalem, his second holiest city.

Paris burns anyway. As the French seem to learn every 70 years, appeasement does not work. It merely whets the appetite. And the angry alien young were already hungry.

You know that things must not be all sunshine and roses when the Hollywood types abandon ship.

The problem is that there is nowhere you can go to get away from the danger; no appeasement; no negotiation possible. It must be faced and fought until all the rats are finally exterminated.