WHAT TO DO ABOUT IRAN? 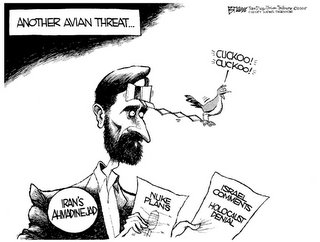 Charles Krauthammer today discusses the psychosis of Iran's president--and to get the most chilling effect, you must read the entire piece:

Lest you get carried away with today's good news from Iraq, consider what's happening next door in Iran. The wild pronouncements of the new Iranian president, Mahmoud Ahmadinejad, have gotten sporadic press ever since he called for Israel to be wiped off the map. He subsequently amended himself to say that Israel should simply be extirpated from the Middle East map and moved to some German or Austrian province. Perhaps near the site of an old extermination camp?

Except that there were no such camps, indeed no Holocaust at all, says Ahmadinejad. Nothing but ``myth,'' a ``legend'' that was ``fabricated ... under the name `Massacre of the Jews.'''

This brought the usual reaction from European and American officials, who, with Churchillian rage and power, called these statements unacceptable. That something serious may accrue to Iran for this -- say, expulsion from the U.N. for violating its most basic principle by advocating the outright eradication of a member state -- is, of course, out of the question.

The question is, what to do about Iran: its genocidal maniac president; its lunatic mullahs; and, of course, its soon-to-be-operational nuclear weapons program?

While Europe has diddled around, even the Iranian regime's lying reassurances that its nuclear program was strictly "peaceful" has gone by the wayside. The Iranians see clearly that they needn't bother to reassure people who are willfully blind, particularly since Europe isn't going to do anything about it even if they opened their eyes.

While the UN and its chief appeaser negotiator bask in the glowing warmth of the entirely meaningless Nobel Peace Prize; they can rest assured in the knowledge that, because of their institutional incompetence and fundamental stupidity, the world teeters closer toan Iranian-style armageddon. Always put off to tomorrow what you can't blame the US for today.

I suspect that both Europe and the UN intend to leave the dirty work to Israel--that way they can have their cake and eat it too. By that, I mean that these courageous international leaders can continue to pretend that Iran is peaceful; or that they are even reasonable, in order to justify not doing anything themselves to upset the mullahs; while at the same time they can freely able to point any finger of blame at Israel--whether it is successful in destroying the Iranian nuclear program (the ideal situation) or not. In either case, Israel will not generate any feelings of gratitude in the world community, but will continue to be the world's beloved scapegoat. 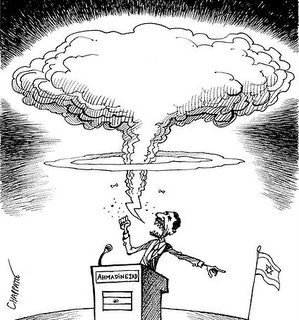 Much has been made about the fact that the Iranian nuclear program is hidden and well-protected; and that there is no hope of a single strike that would "take out" facilities there (the way Israel once did with Iraq and Saddam).

But here are a few modest suggestions:

- Is there a reason why the US cannot arrest Ahmadinejad the next time he is in New York--particularly since there is every reason to believe he was involved int he Carter-era Iranian hostage taking of Americans. He needs to be held responsible for that criminal act. His arrest would definitely stir things up and that might not be a bad thing if the Iranian death star is not yet fully operational. Why not?

- Sherlock Holmes once wanted to find out where someone had cleverly hidden something he needed. He correctly reasoned that if it was something precious to the individual who hid it, that when threatened, the first thing they would do is to check and make sure it was still intact. Such a strategy could be very efficient.

- There are other targets besides the nuclear weapons facilities that--if taken out--would effectively neutralize such facilities; e.g., certain religious persons.

- There are other targets besides the nuclear weapons facilities that are precious to the President of Iran and if taken out would further destabilize him (clue: one of them is mentioned in Krauthammer's piece). Mentally destabilizing him before Iran becomes capable of using nuclear weapons would be better than after.

- There is a strong freedom movement in Iran, which, given the chance (and enought firepower) could make a change in leadership possible. It would seem that practically anyone else in the position of power would be a better bet for, not only the Iranians, but the rest of the world.

I'm only a blogger (and hence can say some things that the State Department would be unlikely to say), but it seems to me (to quote a well-known source) that "the time has come; the time is now; ; [Iran's nuclear capabiltiy] must go go go; we don't care how." It is really that simple, and even those who habitually put their hands over their eyes and refuse to look at what disturbs them, are able to at least smell the stench of mortal danger that emanates from that country. 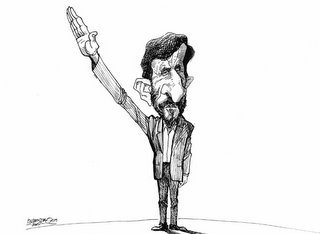 And, I concur with Mark from Mexico in suggesting that, whatever is done should be "appropriately lethal." AMEN

UPDATE: Sigmund,Carl&Alfred link to a video demonstrating how Hizbollah has been inspired by the antics of the President of Iran.
Posted by Dr. Sanity at 1:27 PM