WE WIN, THEY LOSE

The day before the Iraqi vote, Mohammed at Iraq the Model says:

Tomorrow it’s going to be us who decide and I can feel the greatness of the responsibility because the result will draw the shape of our future and will determine how long it will take till we can announce victory in this war; our war against the past, against the past’s illusions and the past’s mistakes; with our hands we can make this war last shorter… with our own choices.

One year ago we wanted to defeat terror and the shadows of dictatorship and tell them that we are not willing to go backwards and that we’re ready to build a new Iraq where the people choose their representatives…
The choice didn’t matter then as much as voting itself did; all we wanted to do was to go and cast our votes regardless of the choices we made.

Yesterday we were sitting together with our friends talking and discussing our points of view. We found that our ambitions are way bigger than the mere idea of voting or practicing our right to elect, now we feel that our votes are a responsibility and a heavy one.
We are hesitant and worried about our choices and maybe the opinion polls results that we’ve seen-or at least from what I hear from people I meet-indicate that there’s a higher percentage than normal of people who haven’t made up their mind yet on who to vote for.

Me and my friends were sitting discussing “who’s best for Iraq?” and the reasons on which each one of us based his/her opinion. I was seeing a drastic change in the sense of the historic responsibility we shoulder.
I see my friends call their friends and acquaintances encouraging them to vote for this candidate or that list and putting effort in convincing them with this or that idea.

In a matter of one year questions and answers changed a lot; less than a year ago the question was “will you vote?” But now the question is “who are you going to vote for?”
We are making progress, definitely we are! 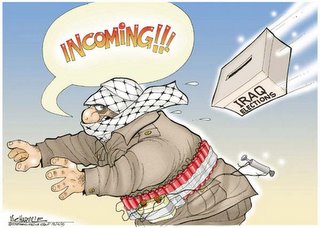 He wants timetables, timelines, measurable outcomes; powerpoint bullets; and all the other bureaucratic accoutrements that are the hallmark of official bulls***. Having worked for the Federal Government for far too many years in the past, I am perfectly aware of the the complete uselessness of these time-wasting and completely fantasy-driven types of documents that appease the bureacrats and managers, but have nothing to do with reality. They are about as useless as....as a Democrat in wartime.

I will leave it to the commanders and the men and women on the ground to develop the specific tactics necessary to achieve victory. Those tactics are never condensable to a powerpoint presentation with its pretty bullet charts and timelines; since in the real world they must be adaptable, flexible and proactive depending on the situation on the ground.

As far as our overall strategy, we should simply adapt President Reagan's well-known strategy for victory in the the Cold War, to the Iraq War and the GWOT: "WE WIN, THEY LOSE" . We also need to remember another profoundly true point made by Reagan: "No arsenal, or no weapon in the arsenals of the world, is so formidable as the will and moral courage of free men and women."

And as the Iraqis have already demonstrated twice before and will demonstrate again tomorrow: WE ARE WINNING.
Posted by Dr. Sanity at 8:31 PM