Here's the best reason I can think of to be orbiting Earth on New Years Eve! An email from a friend, Jim Oberg, author of the book Pioneering Space; and with a website of the same name:

According to information from Russia's Mission Control Center,
the International Space Station on December 31 will enter and
depart from the year 2006 fifteen times before settling
permanently into the New Year. See http://mcc.rsa.ru/

The station's official on-board time is Greenwich, or
Eastern Standard Time + five hours. So it will be
'officially' the new year at 7 PM EST on Dec 31,
as it passes over the Indian Ocean. The crew,
however, will have been asleep for a few hours
by then.

They will already have been able to celebrate
an unofficial new year, several times in fact.

As the station circles Earth, it will pass over time zones
that have popped into the new year by passing local
midnight. On average it will take about 4 minutes to
traverse each ground-based time zone.

The first time this happens is at 6:14 AM EST (11:14 GMT)
when the station reaches the first ground-based time zone
to pass local midnight, the zone right to the west of the
international date line in the mid-Pacific. The station will
be passing near the Aleutians at that point.

It will continue to happen every time the station orbits Earth,
which takes about 98 minutes (referenced to a point on the
Earth's rotating surface -- in pure 'inertial space' a single
orbit takes about 92 minutes). Each time the station comes
around, one or even two more time zones will have passed
local midnight so the time overflying "2006-land" will get longer
and longer.

The LAST time the station moves from 2005 to 2006 will be over
the mid-Pacific just east of the date line, and that occurs at
5:08 AM EST on January 1. By the time it comes around again
the last time zone with local time still before midnight will have
'expired' and transitioned into 2006 as well.

Outer space forces its visitors to adjust to entirely new
patterns of time, divorced from earth-based astronomy-driven
time-givers. I wrote a chapter on this for my book 'Pioneering
Space' and would be happy to send it to anybody, or discuss
this theme as part of New Year's Eve commemoration.

Wow. And, talking about partying too much: 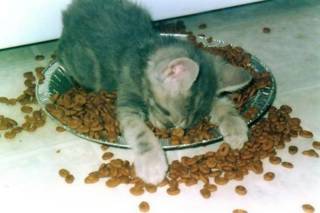 As you prepare for New Year's Eve, be very careful to considers the consequences of overindulgence !

The Carnival of the Insanities will be posted first thing in the morning (well maybe not the first thing) and thenI plan to take the rest of the day off from blogging. See you Monday--Have a safe and happy evening!