BizzyBlog reports on some extremely good economic news for Americans (news that made it into a Chinese newspaper, but not into any American paper except the WSJ:

In a separate editorial later in the week (requires subscription), The Journal noted that household net worth has increased $10 trillion since the Bush tax cuts took effect in 2003. That’s a 24% increase in roughly 2-1/2 years. The negative financing gap means that companies were, on the whole, able to finance their capital expansions out of profits instead of borrowing money or selling stock. 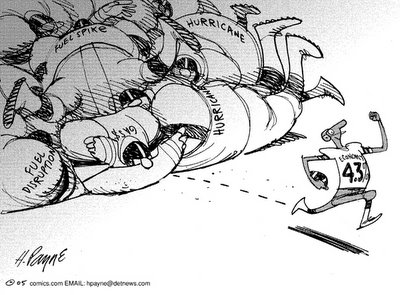 Read all the good economic news, and consider that we've had major disasters and rising gas prices--neither of which has slowed down economic growth. 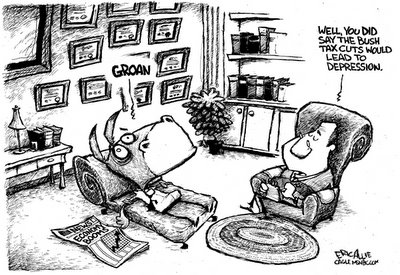 The MSM is trying hard to keep this information close to the vest, but the true state of affairs is "leaking" out (Quick! Where's Fitzgerald??). With Iraqi elections to be held this week and likely some troops coming home next year, the positive economic outlook has really induced a serious depression in the Democrats.
Posted by Dr. Sanity at 10:04 PM