Abu Musab Al-Zarqawi has been killed.

This is a good day for the forces of peace and freedom.

Michelle has the updates. 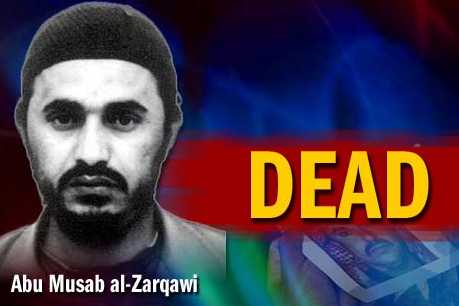 UPDATE II: (7:35 am EST) President Bush this morning- "Zarqawi has met his end and this violent man will never murder again...America can be enormously proud of its military forces...The difficult and neceassay mission in Iraq continues...Zarqawi's death is a major victory in the GWOT."

“Ladies and Gentlemen, Coalition Forces killed al-Qaida terrorist leader Abu Musab Al-Zarqawi and one of his key lieutenants, spiritual advisor Sheik Abd-Al-Rahman, yesterday, June 7, at 6:15 p.m. in an air strike against an identified, isolated safe house.
“Tips and intelligence from Iraqi senior leaders from his network led forces to al-Zarqawi and some of his associates who were conducting a meeting approximately eight kilometers north of Baqubah when the air strike was launched.
“Iraqi police were first on the scene after the air strike, and elements of Multi-National Division North, arrived shortly thereafter. Coalition Forces were able to identify al-Zarqawi by fingerprint verification, facial recognition and known scars.
Al-Zarqawi and al-Qaida in Iraq have conducted terrorist activities against the Iraqi people for years in attempts to undermine the Iraqi national government and Coalition efforts to rebuild and stabilize Iraq. He is known to be responsible for the deaths of thousands of Iraqis. Al-Zarqawi’s death is a significant blow to al-Qaida and another step toward defeating terrorism in Iraq.
“Although the designated leader of al-Qaida in Iraq is now dead, the terrorist organization still poses a threat as its members will continue to try to terrorize the Iraqi people and destabilize their government as it moves toward stability and prosperity. Iraqi forces, supported by the Coalition, will continue to hunt terrorists that threaten the Iraqi people until terrorism is eradicated in Iraq.”

UPDATE V: One wonders if a certain President of Iran is considering his own mortality??

UPDATE VI: Al Qaeda spin (per Fox News): Zarqawi's death is "joyous news" because he is now in paradise. (I'll post a link when available). My spin: I'll bet he didn't expect "paradise" to be so hot.
Posted by Dr. Sanity at 9:38 AM