You have to read this article to understand how hapless the Democrats are when it comes to the big issues like Iraq and the war on terror. It's sad, but they just can't seem to find their position on Iraq (i.e, agree on what position will get them the most votes).

But, that is the problem with operating on the basis of opportunism, instead of having any fundamental principles to guide you. As far as I can tell, the only principle guiding these kids is "we hate Bush, so vote for us." The party of nothing, has nothing to offer in these dangerous times--only antiwar platitudes and self-serving behavior.

Once again we see the absolute lack of integrity, honesty, and the unending opportunism of Democrats who are currently more interested in regaining power than they are in protecting and defending the U.S.

There are very real issues--both nationally and internationally-- that require the goodwill and common sense efforts of both Democrats and Republicans. Disagreements are expected and spirited debate has always been an important part of our heritage. Republicans are certainly no saints; but the Democrat's behavior regarding the Iraq war and the War on Terror in general, simply cannot be justified; and demonstrate neither goodwill nor common sense.

This is symptomatic of the PC cancer eating at the soul of the left--and it reveals a fundamental anti-Americanism; so irrational; and so distorted by Bush hatred that it is willing to sacrifice America and all it stands for to the barbarians we are fighting.

American citizens possess a lot of common sense when it comes right down to it. They may not like the situation in Iraq or the world--or even think that Bush is not handling these issues particularly well. Yet, anyone with common sense would look at the alternative(s) offered by the Democrats, and then vote for the Republican.

In other words, think outside your ideological box--and grow up and do what's right--even if it's not popular. 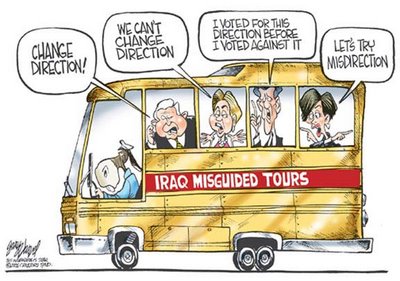