In case you doubt the anti-capitalist agenda of todays radical left environmentalists, here's a recent cartoon that sums it up for you: 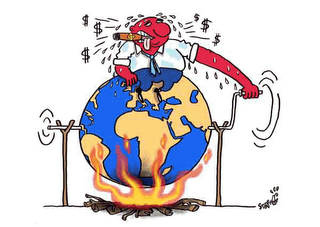 As you can see, the gist of the cartoon is that global warming is being deliberately caused by all about those money-grubbing capitalists.

This conveniently forgets the environmental disasters that socialist and communist paradises in the world have presided over in the last 50 years or so.

The basic issue for these radical environmentalists is not to end global warming--it is to discredit capitalism and to use global warming and other environmental concerns as a justification to impose their ideological and political agenda. They haven't a clue how to really counter the natural cooling and warming trends of the planet--but if they blame it on human beings, then the solution is to control people.

Global warming is a scientific issue. I can be convinced that the earth is getting warmer, but it will take more than slogans and hysteria to convince me that the warming is something other than a natural cycle in our planet's history that may have some repercussions on human life.

If the radical environmentalists really wanted to "do something" about global warming, then they would be calling for funding projects that explore countermeasures and methods to adapt to it. What we see instead is the same kind of religious fanaticism and holy fervor that the left so despises in the fundamental right. But what they really want is power over people.

Over at Gates of Vienna, the Baron notes:

Perhaps that is why they have willingly joined forces with radical Islam, which suffers from the same inabilty to bring peace (unless you count death as the ultimate "peace") and prosperity to their adherents; and has the same fantasy.

Fantasy environmentalism -- bringing new life into the socialist agenda, and coming soon to a theater near you!
Posted by Dr. Sanity at 11:49 AM