OH FRABJOUS DAY FOR THE LEFT

"Beware the moonbat left, my son!
They hate the free and strong U.S.
Beware pelosi birds, and shun
The frumious BDS!"

Still, he took his freedom sword in hand:
Long time the brutish foe he fought--
Not all are pure despite demand,
Yet justice will be always sought.

For justice seeks both truth and good,
While moonbat left likes to inflame,
They shiffled through the kerried wood,
And murthad as they played their game.

One, two! One, two! And through and through
The MSM goes snicker-snack!
They want him dead, and with his head
Get their agenda back on track.

"Now this could be the next Mai Lai!
For we don't care who we destroy!
O frabjous day! Callooh! Callay!"
They chortled in their joy. 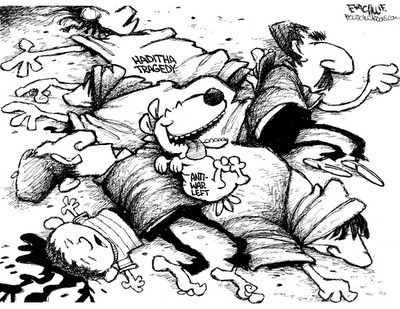 UPDATE: (also updated here) Here's a fundamental difference between the left and the right position on the war on terror:
The left thinks it is unseemly that the right is "whooping it up" because a group of terrorists is caught in Canada before they could act on their terror plans.

Meanwhile, the right kind of thinks it is unseemly that the left is overjoyed because Marines might have killed innocent civilians in Iraq. (Don Surber takes down the NY Times here)

I'll leave it for you to decide which of these positions is morally repulsive.
Posted by Dr. Sanity at 11:48 PM