In a piece posted at RealClearPolitics this morning, Jack Kelly talks about the one clear similarity between Iraq and Vietnam--the fact that the enemy in both conflicts, despairing of victory on the battlefield, sought to win with a propaganda campaign. In the course of this discussion, Kelly relates this tidbit:

A disturbing anecdote from Col. McMaster illustrates why. His 3rd ACR broke the insurgents' hold of the city of Tal Afar last September in an operation which generated these effusive words of praise from the town's mayor:

"To the lion hearts who liberated our city from the grasp of terrorists who were beheading men, women and children in the streets...(you are) not only courageous men and women, but avenging angels sent by The God Himself to fight the evil of terrorism."

Time magazine had a reporter and a photographer embedded with the 3rd ACR. When the battle was over, they filed a lengthy story and nearly 100 photographs.

"When the issue came out, the guts had been edited out of the reporter's story and none of the photographs he submitted were used," said the admiral, quoting Col. McMaster. "When the reporter questioned why his story was eviscerated, his editors...responded that the story and pictures were 'too heroic.'"

Kelly correctly notes the similarity in the national media's willingness to be the enemy's propaganda dupes; but there is another role the media is playing that is equally, if not more frightening. The media is not only mindlessly spewing forth the anti-American enemy propaganda, it is doing the enemy's spying for them, by reporting the details of yet another classified national security program. Stephen Spruiell at MediaBlog:

According to the NYT's own reporting, the program is legal. The program is helping us catch terrorists. The administration has briefed the appropriate members of Congress. The program has built-in safeguards to prevent abuse. And yet, with nothing more than a vague appeal to the "public interest" (which apparently is not outweighed in this case by the public's interest in apprehending terrorists), the NYT disregards all that and publishes intimate, classified details about the program. Keller and his team really do believe they are above the law. When it comes to national security, it isn't the government that should decide when secrecy is essential to a program's effectiveness. It is the New York Times.

National security be damned. There are Pulitzers to be won.

From these two articles, we begin to get an idea of what Time and the NY Times really considers "heroic". And, what a surprise, what comes across very clearly is that the only heroism in this conflict is their own behavior, speaking the cliched "truth to power", standing up for the fundamental principles of a free press and the public's right to know the truth. Having identified their real enemy--the Bush Administration--they willingly aid and abet the terrorists, whose side they are clearly on.

National security be damned. They have their own war to win. And they won't cut and run or redeply their forces until their mission is accomplished and Bush is defeated. Anything that furthers that specific goal, by their definition, is truly heroic. 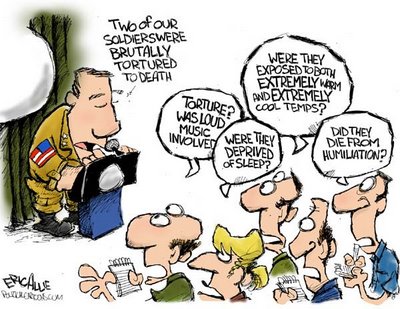 UPDATE: Andy McCarthy on the media's "war against the war":

Yet again, it sided with al Qaeda. Once again, members of the American intelligence community had a simple choice: remain faithful to their oath — the solemn promise the nation requires before entrusting them with the secrets on which our safety depends — or violate that oath and place themselves and their subjective notions of propriety above the law.

Once again, honor was cast aside.

UPDATE II:Jeff Goldstein - "Just keep telling yourself: It’s because they care about YOUR CIVIL LIBERTIES!"

These people are not acting like journalists at all. They are acting as a fourth branch of government, co-equal with the others. They arrogate to themselves the power to classify and declassify, to protect or reveal secrets and sources, as they see fit. Which is to say, according to their political ambitions.

And, you know what? They haven't even been elected! How it must irk them that Bush was.
Posted by Dr. Sanity at 10:43 AM