As I was saying in the previous post, the "adults" who make up most of the Democratic Party leadership and their lunatic leftist base, are completely unfit to manage reality because they are too busy having hissy fits that everything isn't perfect. 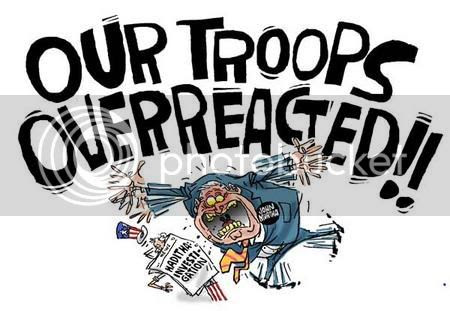 Meanwhile, Ace absolutely nails the psychology of the left as he discusses why they revile Jeff Goldstein so much (and BTW, you should definitely read the entire post):

Leftism, and liberalism, and progressivism, and etc-ism. are not merely simple politics for most of these people. Their politics to them are a core part of their identity, and, more importantly, a central support propping up their egos. They are enlightened because they believe these things; someone who does not believe these things, and yet who, superficially at least, appears to be about as smart as they might be, represents a threat to their egos. The foundation upon which a crucial structure of their sense of self-worth is undermined if they discover that there may be people who can pass as normal and intelligent and yet do not believe as they do.

If one is smart, then one believes in progressivism.

If one believes in progressivism, then one is smart.

Those are the two assumptions that prop up their sense of self worth, and they are refuted by examples of smart people who don't believe in progressivism.

And because there is a great deal of personal psychological investment in progressivism, they react intemperately to rejections of it. It's not merely a tax cut that's being debated; it's they're very sense of importance that's being attacked. It's not merely gay marriage which is being argued against; it's their value as human beings that is being uncouthly denigrated.

[...]Because there is so much ego involved in the self-definition as progressive, the need for intellectual conformity becomes stultifying.

The truth is that reality itself -- when it is imperfect and/or doesn't conform to their preconceived ideas -- is a slap in the face to this crowd. How dare Jeff Goldstein, a university professor who should know better, think differently from us? How dare bad things happen in a war? How dare the military, including every single individual within it, not be perfect like us?

In fact, (if I may digress from their hatred of Jeff, who doesn't conform to their positive stereotype of the intellectual; to the US servicemen and women who do conform to their negative stereotype of the "warmonger") they long ago dismissed the military and anyone in it as semi-literate, oafish, tools of oppression; whose only purpose is to kill innocents and advance the evil objectives of America (particularly when a Republican is President). Military action is never good enough, fast enough, tidy enough, perfect enough for them.

They are so threatened on such a fundamental level at the idea that the US military could still be a force for good--despite incidents like Abu Ghraib or even Haditha (and we still do not know all the facts about the latter, but justice will be done)--that their reactions to any problem are overblown, histrionic, and completely irrational.

Let me quote from a recent commenter on this post at my blog:

As usual, you are full of shit. Our troops are murderers and our nation is the source of most of the problems of the world. We steal from the poor and give to the rich. I hate America and everything she stands for. If it were up to me, I'd see all its citizens living under sharia. It's what they deserve.

That's all they know, and all they need to know. Aren't they clever?

UPDATE: Scott Ott has some breaking news: Congressman Murtha is going to be offering "core values training" to the insurgents.
Posted by Dr. Sanity at 10:57 AM