REACTION ON ZARQAWI'S DEMISE FROM THE REALITY-BASED COMMUNITY

Daily Kos-Who cares?(*Note - this is not a direct quote, so I have added the following, which is, as an update) : "Where is Osama? Where are the batillions of trained Ira)qis? Doesn't matter, we got this guy, right? We wrote a 25 million check as a reward, and get a new headline to bump off Haditha."

AMERICAblog: "He's been demonized (clearly he was a bad guy) as the central figure in the problems over there so it will be interesting to see the actual impact of his death."

the talking dog - "What a week this has been for the GOP AMERICA! Today's spectacular news is that terrorist leader Abu Musab al-Zarqawi has been killed in an airstrike north of Baghdad. This was "confirmed" by the Iraqi government, but actual confirmation appears on the Islamist web-site of his "organization", "Al-Qaeda in Iraq". In short, it might actually be true. There is no doubt that this will be the greatest day in the long march toward winning the key battle in Iraq in the global war against swarthy-people's extremism since the fall of Saddam, or the toppling of his statue, or the deaths of Qusay and Uday, or the capture of Saddam, or the battle of Fallujah, or the first election, or the second election, or the naming of al-Maliki.
This comes on top of the defeat of insurgent California school board member Francine Busby in the global struggle taking place in California's 50th Congressional district.
Take that, you dirty jihadists! You've been SERVED! "

The Carpetbagger Report - "One relevant angle to this story, however, that has not been emphasized (or even mentioned) by most news outlets today is that Zarqawi could have been taken out years ago, but Bush decided not to strike."

From an open thread at Eschaton this morning- Al Zarqawi just got blown up. Well I hope they were able to save his pistol. Bush will want that.
That way he can play with it and the Saddam pistol and pretend he's 'Yosemite Sam'!

From a comment thread at Think Progress: "Later today the Bush trolls will flood onto the TP threads calling us all traitors, while they praise Dubya Dunce Decider as a decisive hero in winning the war in Iraq > yep bullcrap!

Democratic Underground - "Don't worry, he's not dead. In a few months, Shrub will wake up in his bed, go into his bathroom, open the shower door and there al-Zarqawi will be. It will all have been a dream."

TAPPED - "TURNING POINT! TURNING POINT! Look, it's great that Zarqawi's dead, and it's certainly too bad the Bush administration chose not to kill him when they had the chance years ago, preferring to keep him alive since it was useful to bolstering the set of deceptions they used to launch a war in which tens of thousands of innocent people have been killed, but let's not kid ourselves here. Zarqawi's importance to the tactical situation in Iraq has always been overstated, and I doubt he has any significance at all to the strategic situation."

Juan Cole - "There is no evidence of operational links between his Salafi Jihadis in Iraq and the real al-Qaeda; it was just a sort of branding that suited everyone, including the US. Official US spokesmen have all along over-estimated his importance. Leaders are significant and not always easily replaced. But Zarqawi has in my view has been less important than local Iraqi leaders and groups. I don't expect the guerrilla war to subside any time soon."

Shakespeare's Sister - "So, while it's no doubt good news that Zarqawi is no more, it's worth remembering that Bush wasn't willing to hit this known al-Qaeda terrorist in a known location based on air-tight intelligence before the war even began.” Indeed.

That’s the way it is with the Bush administration. Every good deed has a shit-streaked lining."

Booman Tribute - "Zarqawi's death will have more value for President Bush and his supporters, than it will for anyone else. That's my view of this "event" as of this morning anyway. A major propaganda victory on the home front, but, as with Saddam's capture, not much else. But who knows, this time I might be proven wrong. I'd certainly like to be."

Firedoglake (Taylor Marsh, again) - "During the news conference, General George Casey said al-Zarqawi’s death would not end the insurgency. That’s for sure. It’s pathetic that Casey has to remind everyone that this doesn’t solve our challenges in Iraq, considering how far gone the country is at this point. But with Bush and the administration feeding progress propaganda to us at every turn it’s a point that must be made.

Now we’ll get to see the truth about Murtha’s case regarding insurgents vs al Qaeda types in Iraq. The reality is that it’s going to take a lot more than killing al-Zarqawi to change reality on the ground in Iraq.

Good riddance to al-Zarqawi, especially what he did to Nick Berg. But his death comes so late in Bush’s preemptive war games it’s hard to appreciate it at all."

From Michael Berg, father of Nick Berg (via STOPtheACLU)- "I have no sense of relief, just sadness that another human being had to die...As the poet John Donne said, any man’s death diminishes me. It doesn’t bring my son back, and this will just bring a new cycle of revenge killings”

John Kerry - Some Democrats renewed pressure on Bush to bring U.S. troops home by the end of the year. "Our troops have done their job in Iraq," said Massachusetts Democratic Sen. John Kerry.

UPDATE III: From another prominent Democrat:

Pete Stark, D (CA) - "This is just to cover Bush's [rear] so he doesn't have to answer for Iraqi civilians being killed by the U.S. military and his own sagging poll numbers. Iraq is still a mess -- get out." 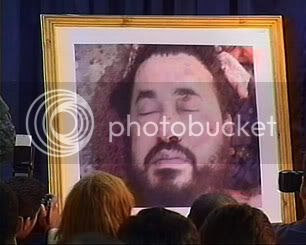