Throughout human history there have always been shamans and other elite high priests or priestesses in every primitive culture. Their job has been remarkably consistent down through the ages--to provide a religion du jour explanation for events in the real world which the primitive mind could not comprehend. Usually that explanation, even in modern times is a variant of the following: "You have sinned and brought these evils upon yourself! God/Allah/Other is very displeased! Repent, or you will die/the world will end/bad things will happen."

This kind of explanation is actually fairly comforting to many, because it assumes that you have within your control the ability to prevent all sorts of horrible things from happening --like devastating natural disasters;weather-related phenomena; and many other assorted "acts of god".

Now, there is no question that human behavior has an impact on events in the real world. The problem with the religious fanatic is that this explanation focuses primarily on the "sins" the believer, and on satisfying that believer's need for redemption and salvation; rather than on the use of human reason and logic to solve the problem.

Most savvy and well-trained representatives of the religion are are able to insure that their believers understand that the cause of any disaster that has befallen the people is directly associated with their own imperfections and lack of true faith in the respective religion. Therefore, the solution to such crises is always to have more faith; more love; more perfection; and, of course, even more dedication to the words of the prophetic shaman or witch doctor.

This strategy works on several levels for the shaman; just as it works for the larger population:
- It provides a readily understandable cause for the disaster and
- It suggests a specific behavior change on their part can prevent future disasters
- It gives people a sense of control over uncontrollable forces
- It intrinsically explains all future disasters (the victims lacked faith)
- It conveys enormous power to the priest/priestess/shaman

On the downside, it doesn't usually generate any useful strategies that will have significant impact in the real world.

We see the shamans and priests at their work today; whenever someone claims that a tsunami or a hurricane or earthquake that takes a terrible toll on human life is actually a divine judgment or punishment for the sins of the victims.

True believers in any religious cult are susceptible to this sort of psychological manipulation; and it usually energizes the survivors and puts them more in thrall to the dictates of the all-knowing shaman.

True believers in non-religious cults are just as susceptible--if not more so because they have real faith that their religion is based on science. What usually goes unnoticed is the fact that reason, logic and science can just as easily be brought into the service of the irrational. In psychiatry, we see this phenomenon all the time; and it is known as paranoia.

As an example, look at today's typical leftist environmental fanatic. For them, it is always mankind's sins that have brought the curse upon him. Repent your evil ways, and you/the environment/the earth will all be saved!

Such movements can gain momentum under the guidance of a really talented shaman, intent on consolidating power, even as they disguise themselves as selfless, doomsaying prophets.

Cox and Forkum have identified for us one of the most recent witch doctors, practicing his voodoo on the gullible masses. 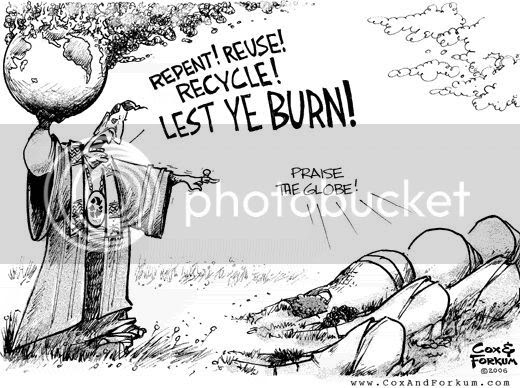