Andrew Stuttaford at The Corner the other day:

The story of those Danish cartoons of the prophet Mohammed continues to rumble on, and as it does, it provides a fascinating example of the mess in which Europe now finds itself. Some recent developments include (1) the decision by the Danish public prosecutor not to take the matter any further, (2) the news that various Danish Muslim organizations are complaining about the cartoon to the European Court of Human Rights and (3) a trip from Denmark by various Muslim intellectuals and activists to Muslim countries to explain what has going on.

The Brussels Journal has more details, but two quotes stand out.

The first is from Carsten Juste, the editor of Jyllands-Posten. He’s refusing to apologize:

“We will not apologise, because we live in Denmark under Danish law, and we have freedom of speech in this country. If we apologised, we would betray the generations who have fought for this right, and the moderate Muslims who are democratically minded.”

The second is from the Danish prime minister:
“I am speechless that those people, whom we have given the right to live in Denmark and where they freely have chosen to stay, are now touring Arab countries and inciting antipathy towards Denmark and the Danish people.”

Keep an eye on this story. It matters.

For those who don't remember the issue, the Danish newspaper Jyllands-Posten is facing escalating accusations that it deliberately provoked and insulted Muslims by publishing twelve cartoons featuring the prophet Mohammed. (Two are reproduced here and all of them can be found here--judge for yourself how offensive they are -- and whether they or any art that might be offensive to someone-- deserve death threats to the artists and the newspapers who published them. ) 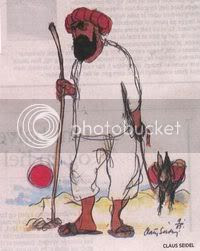 The newspaper urged cartoonists to send in drawings of the prophet, after an author complained that nobody dared to illustrate his book on Mohammed. The author claimed that illustrators feared that extremist Muslims would find it sacrilegious to break the Islamic ban on depicting Mohammed. Twelve illustrators heeded the newspaper’s call, and sent in cartoons of the prophet, which were then published in the newspaper. A firestorm of outrage then followed, as documented here and here. Also, recently a new cartoon "outrage" occurred in Norway.

As Stuttaford notes, this has now been taken up by the European Court of Human Rights. Europe has been soaking in the multicultural muck for sometime now, and it will be interesting to see how they reconcile that politically correct dogma with the human right we refer to as "freedom of speech."

Most of the elite academic institutions in our own country have resolved such issues by ruthlessly suppressing free speech if it happens to "offend" anyone who is a member of an accepted victim class (in which Islam has resided since 9/11). If you are not a member of one of those classes, your feelings about the situation count for nothing (for example, if you are male, caucasian, straight, conservative, and/or Christian). Another special rule in applying the PC formula is that the feelings of a member of any of the identified victim groups, who no longer thinks of himself or herself as a victim, and thinks outside the multicultural/PC box --also does not count in the PC scheme of things.

Keep these special rules in mind the next time you hear or read about the supposed assault on freedom--especially freedom of speech--here in this country. And tomorrow as the Left uses the excuse of the MLK holiday to continue its assault on the Bush administration who they regard as the greatest threat to civiliztion and freedom along with so-called "Christian fundamentalism", you might also do well to contemplate what is happening all over Europe.

It should be obvious to even the most lazy intellect that the real threat to freedom of speech resides somewhere else.

As Denmark and the rest of Europe are finally coming to realize.

UPDATE: Betsy has an example of how the Left deals with "free speech" that they don't happen agree with. If they could, they would impose their own brand of secular fundamentalism on their opponents in this. Isn't it time we all stood up to this kind of intimidation in the U.S. and in the world from both religious and secular fundamentalists? Does the concept of "free and open debate of ideas" refer to only those ideas that you agree with or that don't offend anyone?
Posted by Dr. Sanity at 11:04 PM