I recently completed a two-part series on the Paranoia of the Left (Part I and Part II) and then happened to run accross the following political cartoon, which I think exemplifies that paranoid mindset: 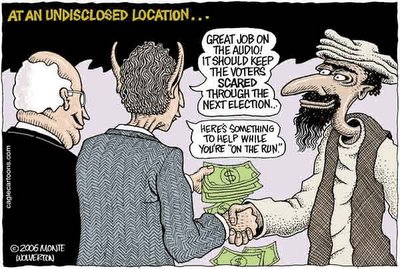 Why in the world would anyone think that the President and Vice President of the United States of America would be in a conspiracy with Islamofascists who openly state their intention of destroying both our country and our way of life? To what purpose? What could possibly be gained?

Don't expect a rational response to such questions. Questions like that only elicit further complicated conspiracy theories that are constructed around all of the shibboleths of the left--anti-capitalism; multilateralism; multiculturalism; poverty; victims of US imperialism; anti-Americanism etc. etc. If you put all the conspiracy theories together you will find a concatenation of bizarre and often contradictory components that should make any reasonably intelligent person roll on the floor with hoots of laughter.

Not only are such a beliefs perfect examples of the depths of insanity to which the liberal left has sunk; but the various theories of Bush's evil possess all the hallmarks of the intense political paranoia that highlights almost all of the left's behavior since 9/11.

When they aren't outright denying the reality of 9/11; they are downplaying its significance; and snidely suggesting that it is not a big deal historically speaking; and that the war on terror shouldn't even be on the priority list of things to do (see here). There has not been a single action by this administration on the war on terror and Islamofascism that has not been deliberately undermined and actively opposed, spun, and exploited for political gain on their part.

The Democrats and their liberal left members maintain that it is Bush and his supporters that are playing fast and loose with politics; and that they are using fear to manipulate America so that they can establish a fascist/theocratic state.

What do these lunatics imagine that they are doing when they describe an NSA program that targets international terrorists communications into the U.S. by referring to it as "domestic spying"? What do these clueless people imagine they are doing by constantly harping on the ridiculous comparisons of Bush to Hitler; or of Iraq to Vietnam? Of modern Christianity to religious fanaticism of Islam? All of these examples are excellent demonstrations of using fear to manipulate the public.

It is impossible for them to believe that anyone in politics would not play the game to maximize their hold on power (since that is what they would do if they were in power); and might actually take action because it is the right thing to do; or that it might be important for national security or in the national interest of America. What a concept!

All their rationalizations and rhetoric represent a classic case of projection, pure and simple. What is obvious to anyone who botheres to think about it, is that it has consistently been the liberal left who have been the appeasers and enablers and who have encouraged, aided and abetted the murderous activities of the Islamofascists--not Bush or Cheney, contrary to the depiction in the cartoon above.

In order to justify in their own minds the treasonous contempt they have toward their own country, they must constantly accuse the Republican in the White House--who is the recipient of the left's unadulterated hatred-- of behavior for which they themselves are guilty.

Indeed, it is the perfect paranoid moment.
Posted by Dr. Sanity at 10:08 PM