MOTHERS OF ALL HYPOCRISY

So, where are all the "whistleblowers" when you need them? Or do you only qualify as a "whistleblower" when top secret national security information is leaked to the press?

For that matter, where are the "leakers", who somehow seem to know the details of even the most sensitive documents and are willing to pass that information to a fair and balanced media who only have our best interests at heart? Isn't the information in the Cisneros investigation sensitive enough for them?

Presumably, the reason why we investigate scandals is to punish the malefactors and adjust laws that had loopholes. Also, to provide enough oversight to put future malefactors on notice. So, that's why it is so frustrating to hear that the Democrats are trying to cover up the report of this decade-old investigation because of rumors that it will unveil evidence that the Clinton administration was siccing the IRS on their political opponents. Don't we deserve to know whether or not this was happening?

The Democrats think this is information the public doesn't need to know; but that classified information about a program to monitor communications to and from our enemies during a time of war is. A very convenient attitude for the Democrats and for the NY Times --particularly those now crowing about the Abramoff scandal; and those who are enraged at the so-called "abuse" of Presidential power -- but only when the President happens to be a Republican.

Because for the Democrats--the mothers of all hypocrisy--the issue is as simple as this cartoon from Cox and Forkum: 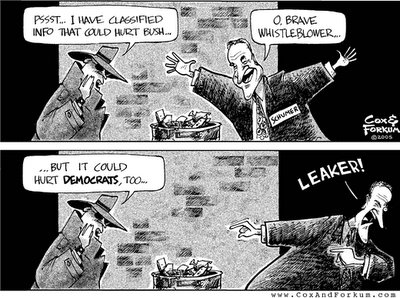