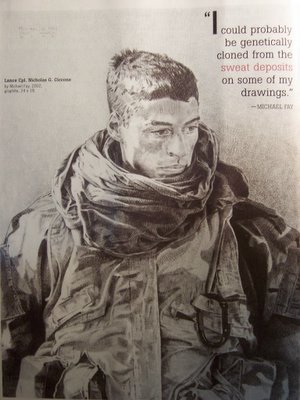 I've recently added a great new blog to my blogroll named Fire and Ice. The blog belongs to Michael Fay, the artist in residence for the United States Marine Corps.

Fay is currently deployed in Iraq creating a body of artwork reflecting the experience of the Marines engaged in the War on Terrorism.

To the left is a drawing of one of Fay's fellow Marines, Lance Cpl Nicholas Ciccone in Afghanistan; and here is Fay's description of the drawing:

"The weather has turned markedly cooler. It has been cold at night, but that night cold has eloped to the day and an even colder cousin has moved into her vacated bedroom. Marines are digging deep into their seabags to find parkas, gloves and scarves in the hopes of taking the edge off the chilly air. This change in the weather has me recalling the time spent in Kandahar, Afghanistan in early January of 2002 at the outset of this war. Now that was CCCCOLDDDD. You awoke in the morning to find the water bottle you left next to your head the night before frozen half solid. Having to struggle out of your triple layered sleeping system at zero-dark- thirty into the icy air to make an urgent head call was a dreaded occurence. Here's a drawing I did of a Marine at Kandahar. He and his platoon, from 3rd Battalion of the 6th Marine Regiment, had just returned from a 12 hour patrol that had been transformed by events into a grueling 9 day sparring match with the Taliban over a giant weapons cache'. Like ghostly apparitions walking off the pages of Gustave Dore's illustrated version of Dante's Divine Comedy, these exhausted young men stumbled in from a walk along the border between Purgatory and Hell. (Drawing appeared like this in the Winter 2005 issue of American Artist Drawing Quarterly.)"

As you can see, this is a very talented artist. Check out his blog and see for yourself.