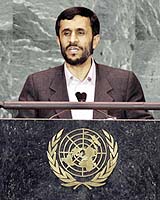 Such delusions may even occur in people who were never religious prior to their illness. And in the sickest individuals, they may be combined with delusions of grandeur, where the person believes they are some figure of religious and historical import. I, myself, have personally met Jesus Christ (several times), St. Theresa, the Pope, Lucifer, and a variety of other assorted religious icons.

At least, that was what they told me at the time.

Those raised in a predominantly Christian culture had delusions of a Christian nature. But I have also seen Hindus, Buddhists, and American Indians with religious delusions that took on the form of their own culture's predominant religion. Interestingly, the one person I saw who had been a committed atheist prior to becoming psychotic, thought he was the "Devil" and the "King of Evil" when his brain strayed from reality.

Which brings me to Iran's President Mahmoud Ahmadinejad latest rantings. An earlier article about Ahmadinejad explained:

As Iran rushes towards confrontation with the world over its nuclear programme, the question uppermost in the mind of western leaders is "What is moving its President Mahmoud Ahmadinejad to such recklessness?"

Its most remarkable manifestation came with Mr Ahmadinejad's international debut, his speech to the United Nations.
[...]
World leaders had expected a conciliatory proposal to defuse the nuclear crisis after Teheran had restarted another part of its nuclear programme in August.

Instead, they heard the president speak in apocalyptic terms of Iran struggling against an evil West that sought to promote "state terrorism", impose "the logic of the dark ages" and divide the world into "light and dark countries".

The speech ended with the messianic appeal to God to "hasten the emergence of your last repository, the Promised One, that perfect and pure human being, the one that will fill this world with justice and peace".

In a video distributed by an Iranian web site in November, Mr Ahmadinejad described how one of his Iranian colleagues had claimed to have seen a glow of light around the president as he began his speech to the UN.

"I felt it myself too," Mr Ahmadinejad recounts. "I felt that all of a sudden the atmosphere changed there. And for 27-28 minutes all the leaders did not blink…It's not an exaggeration, because I was looking.

"They were astonished, as if a hand held them there and made them sit. It had opened their eyes and ears for the message of the Islamic Republic."

Western officials said the real reason for any open-eyed stares from delegates was that "they couldn't believe what they were hearing from Ahmadinejad". (Emphasis mine)
Their sneaking suspicion is that Iran's president actually relishes a clash with the West in the conviction that it would rekindle the spirit of the Islamic revolution and - who knows - speed up the arrival of the Hidden Imam.

The prospect of such a man obtaining nuclear weapons is more than worrying. Any reasonable person on the face of the earth should be scared stiff at the potential destruction that such a person could wreak on the entire world.

Hitler at least did not have a nuclear bomb. And look at the worldwide devastation and death he orchestrated. The Gates of Vienna has already discussed Ahmadinejad's Kampf, for those interested in historical parallels.

If you are interested in the religious background of the Shia 12th Imam, this site gives a good summary. Another summary can be found here. One key point:

Most of Iranian history can only be understood in relationship to the Doctrine of Return and the prophecies associated with it. For instance, during the Iranian Revolution, several Iranians believed that Ayatullah Ruhollah Khumayni, the spiritual and theoretical head of the Revolution, was the Hidden Imam returned to the world of humanity. While Khumayni never admitted this, he never denied it either. In many ways, the Revolutionaries believed that they were engineering or inaugurating the beginning of the reign of justice in the world, just as the radical Protestant English who settled America believed that they were inaugurating the one thousand year rule of saints that would precede the end of the world. Contemporary Iranian politics can in no way be divorced from the fundamental religious tenets of Shi'a Islam.

Several points. Ahmadinejad was a key player during the Iranian Revolution back in the Jimmy Carter presidency-- so his delusion is fairly fixed. Some have even suggested that he thinks he is the 12th Imam. Certainly his religious ecstasy during the UN speech has given him reason to believe that he may be the vessel in which the Imam returns to rule.

A second point that apologists have repeatedly raised is that both the Christian and Jewish faiths have apocalyptic messages and their own psychotic believers who wish to hasten the end-times.

Charles Krauthammer has commented appropriately on that:

So a Holocaust-denying, virulently anti-Semitic, aspiring genocidist, on the verge of acquiring weapons of the apocalypse, believes that the end is not only near but nearer than the next American presidential election. (Pity the Democrats. They cannot catch a break.) This kind of man would have, to put it gently, less inhibition about starting Armageddon than a normal person. Indeed, with millennial bliss pending, he would have positive incentive to, as they say in Jewish eschatology, hasten the end.

To be sure, there are such madmen among the other monotheisms. The Temple Mount Faithful in Israel would like the al-Aqsa mosque on Jerusalem's Temple Mount destroyed to make way for the third Jewish Temple and the messianic era. The difference with Iran, however, is that there are all of about 50 of these nuts in Israel, and none of them is president.

Again, the point to remember is that those who might believe in the imminence of Armageddon to the point of religious delusion in the respective Christian or Jewish faiths do not have nuclear weapons with which to facilitate their psychotic visions.

It is also worth pointing out that the Christian faithful conceive of a coming battle between good and evil in an abstract sense, with the forces of good lining up against their opposite numbers on the dark side. Ahmadinejad takes the same concept and makes it frighteningly concrete (as psychotic patients are wont to do). We are left in no doubt about exactly who Ahmadinejad considers evil and who must be "wiped off the map" in the coming apocalyptic confrontation. 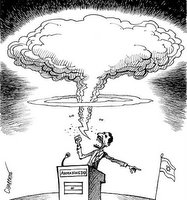 The schizophrenic patients I have seen with religious delusions were often the hardest to treat and least responsive to medication. Most of them had such severely impaired thinking processes that they could hardly function on a day-to-day basis; let alone would they have been able to rise to a position of influence or power in any culture. But there were a few who were notable for their single-minded and persistent incorporation of everything they came in contact with into their delusional system; and who had only contempt for anyone who didn't subscribe to their psychotic ideas. These latter patients exhibited a psychopathically clever and manipulative intelligence that was completely immune to any insight into their illness. These patients' were chillingly and frighteningly serious about their delusion, and to them you were nothing.

Ahmadinejad can conclude all he wants that the West is living in the "dark ages" (*note to Ahmadinejad: if the West is living in the dark ages, then you, sir, reside in the stone age) because they are reluctant to agree to his desire to possess nuclear weapons, but all you have to do is listen to what the man is saying to comprehend the enormous danger he represents to humanity with his mind consumed with dark and apocalyptic visions; and his hands controlling a nuclear button.

And if you think you can't believe what you are hearing... think again. Believe it.
Posted by Dr. Sanity at 5:39 PM