The Democrats vs. Alito 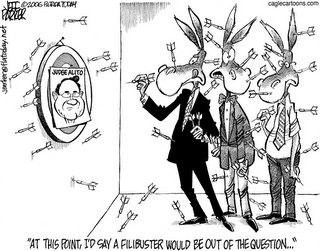 This morning, Thomas Sowell has a commentary at RealClearPolitics that discussses what he refers to as the "Senate Condemnation Hearings". Here are a few excerpts, but read the entire piece:

First, there were those long-winded preambles to "questions" for the judge. Then there were the Mickey Mouse maneuvers and insinuations, spiced here and there with outright lies.
The ridiculousness of the charges was classically illustrated by Senator Joseph Biden's claim that Alito had been part of a group that was trying to keep minorities and women out of Princeton. Apparently wanting everyone to meet the same admissions standards is considered to be the same as being against minorities and women. [...]

At the same level of farce was a loud and insistent demand by Senator Ted Kennedy that the Senate Judiciary Committee vote to issue a subpoena for certain records -- even though those records were readily available without a subpoena. In fact, the records in question had already been received by the committee.
The biggest hypocrisy was asking Judge Alito questions that everyone knew in advance no judicial nominee could -- or should -- answer, and then complaining afterwards on nationwide television that he was not "forthcoming" or "responsive."
[...] 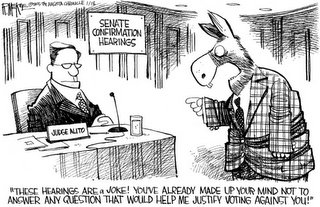 The biggest hypocrisy was asking Judge Alito questions that everyone knew in advance no judicial nominee could -- or should -- answer, and then complaining afterwards on nationwide television that he was not "forthcoming" or "responsive."

None of these ploys had anything to do with determining Judge Alito's qualifications to be on the Supreme Court. At most there were attempts to provoke him to anger with insulting questions, in hopes of providing an excuse for Democrats to vote against him and for the weaker Republicans to be afraid to support him. 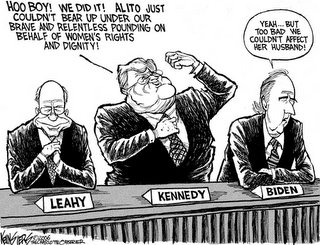 Which is, of course, more than any of the senators who opposed him managed to do.

"Senate condemnation hearings" is sadly an accurate description of what actually went happened in the senate last week.
Posted by Dr. Sanity at 10:11 AM