The World Series and The Presidency

The President of the United States has often thrown out the first pitch to start a new baseball season. What many people do not realize is that during presidential election years, the league that wins the World Series determines which party wins the White House. The New York Times carried an article in October 1976 explaining that the Democrats win the White House if the National League wins the World Series and the Republicans win if the American League does. As of 1976, there had been 18 presidential elections since the first World Series in 1903, and this theory worked 12 out of 18 times. In the modern baseball era, since 1940, the theory has been right 8 out of 9 times–the exception being 1948, when Truman surprised everybody in winning. So, with the Cincinnati Reds winning the 1976 World Series, this article concluded, “I am pleased to announce that the winner of the 1976 Presidential election will be Jimmy Carter.” And what do you know, it worked again! (from: Smith, Gary. Statistical Reasoning. 3rd edition. United States: McGraw-Hill, Inc., 1994)

I have one thing to say about this: GO YANKEES ! 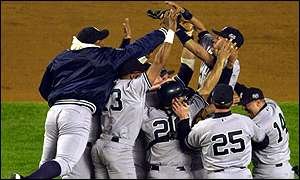 The NY Yankees doing what they do best--winning the World Series!