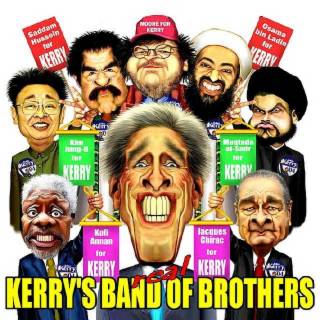 And:
Ben Johnson over at FrontPageMagazine.com has a round-up of endorsements for both Kerry and Bush. Kerry, it turns out, has successfully been able to convince the remaining members of the axis of evil; as well as al-Jazeera, the Palestinian Authority and Yasser Arafat; and other international stalwarts for peace and freedom, to endorse him. Months after John Kerry boasted of having received secret endorsements from anonymous foreign leaders around the world, many of the gaps have been filled in. The leaders of the world have weighed in on the 2004 presidential election. Click on the link above to read about all these key endorsements by world leaders; and also to see which candidate picked up the coveted endorsement of the Communist Party! (no surprise here)