In my own way I have been trying to commemorate the anniversary of 9/11 all week with an emphasis in my posts on what I consider the catastrophic psychological denial regarding 9/11 that has been the hallmark of many on the political left in this country. The posts include:

I see this profound denial of reality as catastrophic because it continues to this day to undermine the war effort; and it encourages and enables the very people who perpetrated those vicious attacks on our soil, and would like to do worse if they could.

While it has been five years since attacks of September 11, 2001, the memory and horror of that day remains fresh in my own mind. Never did I imagine that we would remain free from further attacks, and for that, I blame the Bush Administration and its courageous efforts--despite all the whining, screaming, and hysteria to the contrary--to do what it thought was right to protect America. (cartoon from Cox and Forkum)

For a tribute to each of the victims, go here to the 2996 Project.


For those of you who have the delusion that you reside in the "reality-based" community of the paranoid left (particularly the pseudointellectual academics) and who are so deeply into denial that you wouldn't recognize the truth if it fell from the sky and flattened you, I suggest that you check out the deeply disturbing Al Qaeda 9/11 memorial videos here. If it does not disabuse you of your sick conspiracy theories, then nothing rational will serve, and I recommend you get medication and therapy quickly.

Malkin has a round-up of debunkings. Ace has more. Also MEMRI has a film about the Arab and Iranian response to 9/11, 5 years later. Jay at StopTheACLU has a roundup of many blogger memorials to 9/11. Wizbang, also. 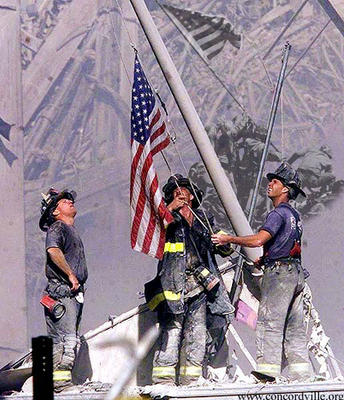