"We did not think, even 1 percent, that the capture would lead to a war at this time and of this magnitude. You ask me, if I had known on July 11 ... that the operation would lead to such a war, would I do it? I say no, absolutely not.'' -- Hasan Nasrallah, Hezbollah leader, Aug. 27

Nasrallah's admission, vastly underplayed in the West, makes clear what the Lebanese already knew. Hezbollah may have won the propaganda war, but on the ground it lost. Badly.

True, under the inept and indecisive leadership of Ehud Olmert, Israel did miss the opportunity to militarily destroy Hezbollah and make it a non-factor in Israel's security, Lebanon's politics and Iran's foreign policy. Nonetheless, Hezbollah was seriously hurt. It lost hundreds of its best fighters. A deeply entrenched infrastructure on Israel's border is in ruins. The great hero has had to go so deep into hiding that Nasrallah has been called no "the underground mullah.''

Krauthammer goes on to say that, no matter how the media is spinning it and for what purpose, Nasrallah and Hezbollah have taken a major political as well as a military hit in Lebanon; and with continued pressure from the international community, the fledgling democracy there can be nurtured. At this point in time, Hezbollah dares not risk another encounter with an Israel who will certainly be much less restrained in its response next time around. Read all of Krauthammer's essay. 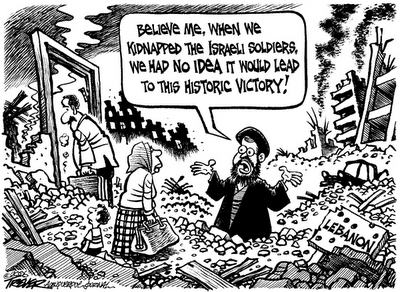 UPDATE: Here's another perspective. I am inclined to think that the two positions may not be as contradictory as they appear. The truth is that we don't know exactly how setback Hezbollah was from the war, but it clearly is much more than they have let on, or that the media report. OTOH, Israel was likely not set back as much as the media report; and, have learned quite a bit about their enemy which will be factored into any future encounter. Additionally, their poor leadership problems will likely be corrected in the near future, while Hezbollah's poor leadership will not change in any significant way.
Posted by Dr. Sanity at 8:25 AM