As usual, Thomas Sowell cuts right to the essentials:

Tolerance has been one of the virtues of western civilization. But virtues can be carried to extremes that turn them into vices. Toleration of intolerance is a particularly dangerous vice to which western nations are succumbing, both within their own countries and internationally.

Double standards are being wrapped in the mantle of morality. The drive to extend Geneva convention protection to terrorists who are not covered under the Geneva convention is one of a number of dangerous self-indulgences by people who seem to think that being morally one-up is the ultimate and survival is secondary.

Senator Lindsey Graham's comment that we are going to win in our struggle with terrorists "because we are better" was all too typical of this mindset.

It would be hard to know which would be worse -- if he said it as just some offhand political rhetoric or whether he is really fatuous enough to believe it and irresponsible enough to gamble American lives rather than extract murderous secrets from captured cutthroats.

Another dangerous self-indulgence is to think that somehow those who enable and tacitly support these cutthroats are "patriotic". They are not. Patriots would make sure their concerns are known, but they would not publicly trumpet them to the detriment of the war effort, or for partisan gain.

True patriots might even grudgingly admit that the real enemy is Islamic totalitarianism-- and not Bush, Cheney, or Rumsfeld--and act accordingly.

There is a time for reasonable criticism and even agonizing hand-wringing; there is a time for partisanship and bickering; but that time is never in the middle of a war, where one side constantly chips away at any possibility of unity by undermining, whining, or otherwise trying to ensure defeat against a ruthless enemy--just so they can position themselves to get greater power.

There is also a time to admit that the left in this country has sunk into a moral depravity so low, they have even abandoned all pretense of standing for true liberal principles anymore. Instead they "progressively" support terrorist's rights to American justice; openly admire the style of a dangerous despot like Ahmadinejad; cheer for petty tyrants like Chavez; and continually make a mockery of the very values this country stands for.

This past week has also seen revelations about our enemies. Venezuelan president Hugo Chavez' cheap demagoguery at the United Nations was a clear sign of the intellectual and moral bankruptcy of his anti-Americanism. Surely if he had anything concrete and serious to say against this country, he would have said it.

Equally clearly, he understood that no coherent argument was necessary. All that was necessary was to tap into visceral resentments and play to the gallery of those poisoned by envy and ready to blame their own lack of achievement on somebody else.

The president of Iran was slicker but his speech at the United Nations and his artful evasions at his press conference are also revealing and should be a warning. He too is obviously playing us for fools.

I know there are those who disagree with me on this, but I can no longer think of the left as mere "useful idiots". Even idiots are capable of facing reality and understanding that their very existence hangs in the balance. The left has become much more malignant, rather than simply idiotic. Because only those who are steeped in hatred and self-delusion could possibly have inverted reality, truth, and even morality the way they have.

The lunatic left deliberately courts tyranny with conscious self-righteousness and arrogance; they want to make nice and stand in solidarity with those whose goal is our enslavement or death.

And I for one, intend to keep hounding them unmercifully until they recognize that simple truth.

If I didn't understand that the real enemy (not Bush, not Christianity, not America) also intends to kill these idiots when they get the chance, I might even harbor the thought that the secularists of the left had actually aligned with radical Islam. And that would be unbelievably stupid of them, wouldn't it? 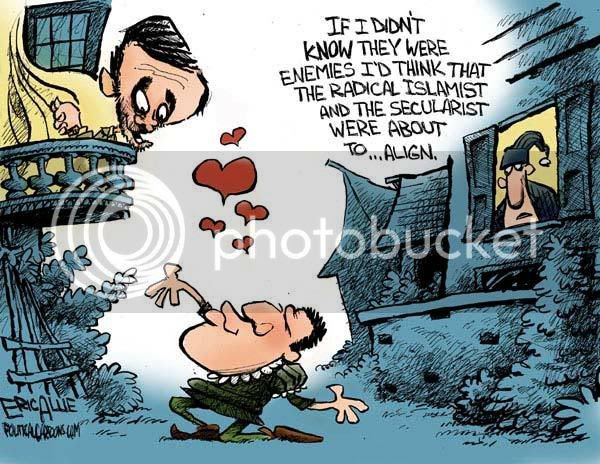 Visit an archive of Eric Allie's cartoons here.
Posted by Dr. Sanity at 7:30 AM