CESSPOOLS OF DARKNESS AND BEACONS OF LIGHT

Did we really need any more evidence of his pathology?

And, don't forget that this guy is the darling of the left, beloved by Cindy Sheehan and a "champion" of the left's perverted totalitarian agenda.

Ahmadinejad, Chavez, Kim, Nasrallah, Bin Laden, Zawahiri, etc....It's enough to make you sick--or to laugh out loud at the insanity of it all-- thinking of the number of madmen loose in the world these days. They are like swirling cesspools of darkness, that seek to drag humanity down into their stinking, hopeless depths.

By way of contrast, the voices of sanity and reason are rare enough to shine like beacons in a raging storm. Here is one of them:

Some have argued that the democratic changes we're seeing in the Middle East are destabilizing the region. This argument rests on a false assumption, that the Middle East was stable to begin with. The reality is that the stability we thought we saw in the Middle East was a mirage. For decades, millions of men and women in the region have been trapped in oppression and hopelessness. And these conditions left a generation disillusioned, and made this region a breeding ground for extremism.

Imagine what it's like to be a young person living in a country that is not moving toward reform. You're 21 years old, and while your peers in other parts of the world are casting their ballots for the first time, you are powerless to change the course of your government. While your peers in other parts of the world have received educations that prepare them for the opportunities of a global economy, you have been fed propaganda and conspiracy theories that blame others for your country's shortcomings. And everywhere you turn, you hear extremists who tell you that you can escape your misery and regain your dignity through violence and terror and martyrdom. For many across the broader Middle East, this is the dismal choice presented every day.

Every civilized nation, including those in the Muslim world, must support those in the region who are offering a more hopeful alternative. We know that when people have a voice in their future, they are less likely to blow themselves up in suicide attacks. We know that when leaders are accountable to their people, they are more likely to seek national greatness in the achievements of their citizens, rather than in terror and conquest. So we must stand with democratic leaders and moderate reformers across the broader Middle East. We must give them voice to the hopes of decent men and women who want for their children the same things we want for ours. We must seek stability through a free and just Middle East where the extremists are marginalized by millions of citizens in control of their own destinies. 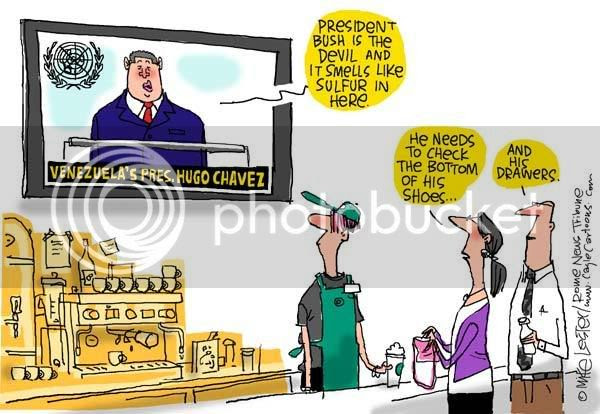 UPDATE: See! It is possible absolutely necessary to laugh at these monsters!
Posted by Dr. Sanity at 7:18 AM