A TRUTH THAT MUST BE FACED

There is a truth that must be faced eventually by all those in the West and it is best enunciated in this op-ed piece on RCP by David Warren:

The case of Abdul Rahman, like the organized Danish cartoon apoplexy (still continuing in some parts of the world, where Muslim demagogues are still using it to whoop up anti-Western hysteria), brings us face to face with Islamic doctrines inimical to the survival of our civilization. And here, I wish I could say "Islamist", but the unpleasant truth is, Islamic doctrines. For the Shariah principles in question are shared by all four of the Sunni schools of jurisprudence (Maliki, Hanbali, Hanafi, and Shafi'i), plus the Shia school. There is no "sixth school" that recognizes religious and civic freedom, in any way that resembles what these expressions mean in the West.

All five of the actual schools or traditions take a view of idolatry, that entirely removes the possibility of freedom of expression in public life. Moreover, all take a view of apostasy that presents a palpable threat to the life and liberty of every non-Muslim, and excommunicated Muslim. And such doctrines as "jihad" (when interpreted as perpetual holy war against all infidels), and "razzia" (permission to raid and plunder our infidel communities) are not such as can be assimilated with Western jurisprudence.

We cannot pretend for long, the way President Bush has been doing (albeit from humane and sound tactical motives to begin with), that the Shariah is compatible with freedom and democracy. The systems of government we advocate, or by necessity impose, must explicitly provide civil protection to non-Muslims and Muslims alike, against Shariah courts and their rulings. I have come to realize there is no alternative to this.

This is an unpalatable reality. We see evidence of it daily in the practices of Islamic shari'a--even in a country like Afghanistan which has only recently had the boot of the Taliban removed from its neck, only to have them voluntarily substitute a new and shinier boot to their own neck.

As Warren stipulates, shari'a--and perhaps Islam itself, must be stared down. This is hard to do when your own institutions crumple when stared at by Islam. The most recent cases in point are the cowardly and morally repugnant decisions of Borders and Waldenbooks to refuse to carry a magazine, Free Inquiry, because it discusses the Danish cartoons and has the audacity of actually reprinting one of them for its readers.

These businesses claim this was a business decision made for the safety of its customers and staff. I think that political correctness played an even bigger role. Well, I too, can make a business decision and I choose not to buy books from either outlet anymore since they have bowed to shari'a.

Either we stand up to the bullies and psychopaths of this sick religion that comes to us straight from the middle ages, or we submit to their perverted legal system. If we cannot even make a stand on our own shores how can we fight for these freedoms elsewhere?

This is yet another symptom of the virulent strain of moral relativism that has infected our own culutre, which we call "political correctness" and "multiculturalism". If we do not pursue aggressive treatment for it, I fear it will be the death of us.

It is no wonder Islam believes it can win this war. 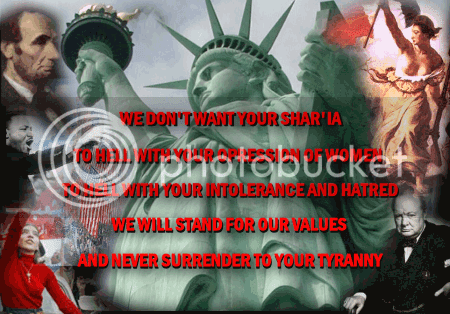 UPDATE: At Borders (which originated in my home town of Ann Arbor) it is even worse dhimmitude and appeasement than you can possibly imagine.

BTW, here is a link to the dreaded cartoons, which you should keep viewing regularly to remind youself how insane this is, and what free speech is all about.

UPDATE II: As one commenter rightly points out, I do not know if the link above about Borders is true. So I will amend the update by saying "IF True, at Borders...etc." My bad.

UPDATE III: At the American Thinker, there is this note:

The liberals were right: our civil liberties are slowly disappearing now that George Bush is president. Of course most of the liberals not only seem to approve of these infringements on our freedoms they initiate them-all in the name of the highest ideals of liberalism. Political correctness and sensitivity and all that. And all in the name of religion. But only one religion-Islam.

Yep, its those cartoons again. Mustn’t see them because they are oh so disrespectful, so hurtful. And of course they cause riots. Recently the lack of freedom to view these cartoons occurred in the in one of the main centers of American liberalism—New York. And now a major bookstore chain got religion.

Borders and Waldenbooks have refused to display and sell the April-May issue of the magazine Free Inquiry because of those dreaded cartoons.
[...]
Borders’ apparent lack of respect for these fundamental rights is enough to make me an ex Border customer.

He quotes Borders as saying:

“We absolutely respect our customers’ right to choose what they wish to read and buy and we support the First Amendment,” Bingham said. “And we absolutely support the rights of Free Inquiry to publish the cartoons. We’ve just chosen not to carry this particular issue in our stores.”

And I absolutely support Border's right to free speech by choosing to prevent me from having access to certain books: just as I am sure they will approve my and your refusal to buy books from them in the future. I certainly hope that this business decision has serious economic consequences for them.
Posted by Dr. Sanity at 11:24 AM