JOSE, CAN YOU SEE?

Victor Davis Hanson has an editorial posted that looks at the recent pro-illegal immigration marches, and one paragraph, in particular, struck me forcefully:

Had the demonstrators marched chanting "God Bless America," confined their flag waving to Old Glory, and expressed thanks to a magnanimous United States that gave them a second chance when a corrupt Mexico has precluded their first, then they would have won public support.

Hanson predicts an enormous backlash, basically because of the racist --yes, I said racist--attitudes of the protesters and America's quite natural revulsion at their overweening sense of entitlement, as well as their remarkable grandiosity and attitude of cultural superiority.

These were people who were out there screaming how superior they were to us, and at the same time demanding--demanding!--that we take care of them, give them special priveleges, and acknowledge that their "rights" supercede our own.

Unbelievable. And, of course, the ultimate in politically correct chic.

The Democrats and others on the left are so busy extending "rights" to all sorts of victim classes; even including those people who are actively trying to kill fellow Americans (you know, those poor mistreated enemy combatants in Guantanamo; who supposedly to have the right to a jury trial and all the benefits of citizenship now that they have been captured by America) - why shouldn't La Raza and other assorted Mexican victimhood groups think that they are entitled to even more benefits from a ccountry they appear to despise, but wish to reside in anyway.

When I wrote this post, I was in no way promoting the rights of illegal immigrants, only trying to point out how immigration and the whole "melting pot" idea of our country is at the heart of America's values. We are rightly a beacon of liberty to the world and welcome those "yearning to breathe free". The many hard-working Mexican-Americans who have contributed to this society over generations bear witness to this; as do all the other immigrant groups that have chosen to become Americans and to make a better life for themselves and their descendents.

A beacon of liberty that offers people a second chance at life in a free society is quite a different thing from an "oppressor" who has stolen your land and mistreated your people and therefore owes you...everything. These latter claims come from groups that somehow believe that their "rights" as presumed victims trump all others.

What we have here is the Mexican variant of the Palestinian "intifada"--people who are trying to cash in on the victimhood scam that is the essesnce of leftist politics. Obviously, they have closely observed how the world coddles and supports the sick Palestinian culture--viciously oppressed by the "little Satan" Israel--and now they intend to take advantage of the "great Satan" U.S.; so they can be competitive for the honor of becoming the next most celebrated and pathetic international victims.

I have to admit that I am about as "pro-immigration" a person as anyone is likely to find: and I was completely and totally turned off by what I have observed over the last week. Check out this site, if you want your blood pressure to rise as you observe the fundamental insanity that is at the root of the recent protests.

They are actually serious about "liberating" their people from the great oppression of America's racism. And talk about racism! Their group's entire spiel appears to be based on it. 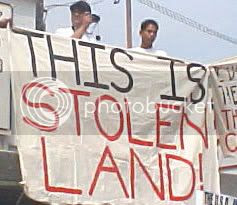 No rational person is capable of believing this kind of rot. Which only means that they will be given a position of honor among the psychotic minions of the lunatic left.
Posted by Dr. Sanity at 12:58 PM