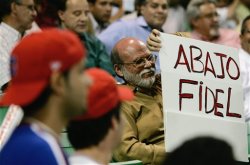 This atory from the AP:
While Cuba played the Netherlands in the World Baseball Classic, a spectator in the stands raised a sign saying: "Down with Fidel," sparking an international incident that escalated Friday with the velocity of a major league fastball.

The image of the man holding the sign behind home plate was beamed live Thursday night to millions of TV viewers _ including those in Cuba. The top Cuban official at the game at Hiram Bithorn Stadium in San Juan rushed to confront the man.

Puerto Rican police quickly intervened and took the Cuban official _ Angel Iglesias, vice president of Cuba's National Institute of Sports _ to a nearby police station, where they lectured him about free speech.

"We explained to him that here the constitutional right to free expression exists and that it is not a crime," police Col. Adalberto Mercado was quoted as saying in El Nuevo Dia, a San Juan daily.

These two stories are a segue into a dream (nightmare?) I experienced last night in which I was watching a old cartoon show called "Pinky and the Brain" (my daughter and I used to watch it when she was smaller). The Brain was articulating to Pinky his most recent convoluted plan for world domination.

"Are you thinking what I'm thinking?" he says to his clueless sidekick. IAnd then, the dream changes and the two suddenly started speaking Spanish as the channels rapidly changed like a roulette wheel and abruptly I was watching a new channel with Ahmadinejad giving a loud speech and pounding on the podium, demanding that Israel be wiped off the map.

Needless to say, when I woke up shortly after this, I had a sudden vision of Pinky Stinky and the Brain in a new, cartoonish sort of light. Good thing I'm a psychiatrist and don't feel inclined to treat my unconscious too harshly for its loose associations.