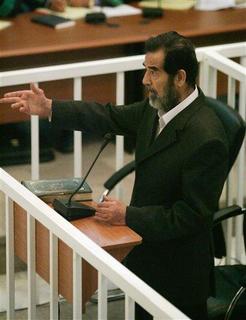 Saddam Hussein goes on trial today. I hope that everyone realizes how significant this is.

Saddam Hussein went on trial Wednesday for a massacre of his fellow Iraqis, turning immediately argumentative as he appeared in a tightly secured courtroom in the former headquarters of his Baath Party two years after his capture. He faces charges in a 1982 massacre of nearly 150 Shiites that could carry the death penalty if he is convicted.
When the trial began, the 68-year-old ousted Iraqi leader - looking thin with a salt-an-pepper bear in a dark grey suit and open collared white shirt - stood and asked the presiding judge: "Who are you? I want to know who you are."

"I preserve my constitutional rights as the president of Iraq," Saddam said. "I do not recognize the body that has authorized you and I don't recognize this aggression ... I do not respond to this so-called court, with all due respect."

The presiding judge, Rizgar Mohammed Amin, a Kurd, tried to get Saddam to formally identify himself, but Saddam refused.


How often in history does a tyrant get to be confronted with his crimes by his victims? The courage of the Iraqis (particularly the judges in this case) fills me with awe. Two democratic votes while under the threat of violence by terrorists in one year; and now the courage to face the past and confront it head on.

The Iraqi people are amazing!
Posted by Dr. Sanity at 10:01 AM