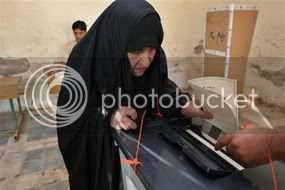 (Just using a typical MSM headline!) From the news: "Whole families marched to the polls, standing in line by the hundreds in the crucial electoral battleground provinces of central Iraq that have mixed populations and will be decisive in whether the draft constitution will pass or fail.

In towns where Sunni Arabs largely boycotted the voting in January parliamentary elections, they now were eager to cast ballots, most of them hoping to defeat a draft charter they fear will set in stone their domination by Iraq's Shiite majority.

"The government can't just sew together an outfit and dress the people up by force. We do not see ourselves or see our future in this draft," Gazwan Abdul Sattar, 27-year-old Sunni teacher, said after voting "no" in the northern city of Mosul.

In a nearby mostly Kurdish neighborhood, Bahar Saleh gave her support to the constitution.

"This constitution will at last give the Kurds their lost rights," the 34-year-old housewife said, coming from the polls with the red-and-green Kurdish flag wrapped around her body.

In the south, the heartland of Iraq's Shiites, women in head-to-toe veils and men emerged from the polling stations flashing victory signs with fingers stained with indelible, violet ink to ensure everyone votes only once.


Oh dear! Who ever heard of people verbally disagreeing on the course that their country should take? That never happens here! How typically democratic!

One voter: "Today, I came to vote because I am tired of terrorists, and I want the country to be safe again," said Zeinab Sahib, a 30-year-old mother of three, one of the first voters at a school in Baghdad's mainly Shiite neighborhood of Karrada. "This constitution means unity and hope."

UPDATE: Iraq the Model has more.

I met one friend on the way and when I asked him what would his vote be he said that he hasn’t decided yet “if I voted yes I would be approving some articles that I don’t agree with and if I voted no we would go back to where we started from…” he said and that was really refreshing because this guy who used to believe in conspiracy theories and stuff like “what America wants is what’s going to happen” now feels that his vote can make a difference.

The conspiracy theories are now probably confined to the terrorists, the MSM, and the Left.
Posted by Dr. Sanity at 12:04 PM