This is what anews service is reporting from a Pakastani newspaper: 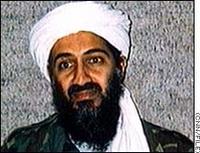 A Pakistani newspaper Ausaf published from Multan has reported that Al Qaeda leader Osama bin Laden died four months ago in a village near Kandahar of severe illness.

According to the newspaper report, Bin Laden was campaigning at Bamiyan, fell very ill, returned to Kandahar where he died and was buried in the Shada graveyard in the shadow of a mountain.

The controversy continues to surround Osama bin Laden and while US and Pakistan officials have often been quoted by the media as saying that his mortal status was just a matter of detail, the hunt is still on and the issue remains a topic of great interest for the media and governments alike.

Funeral prayers have been said for Osama bin Laden over these years with one reported now by the Ausaf, and another in an Egyptian newspaper Al Wafd as far back as December 2001.

Osama bin Laden has a reward of $25 million on his head. Despite this he remains elusive, and could remain that way for a long time, alive or dead.

I am certainly hoping that he remains elusive because he's already dead. I have suspected this is the case, particularly since we are hearing so much about Number Two Thug Zawahiri lately.