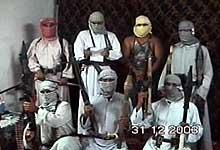 NOTICE ANY SIMILARITY BETWEEN THE TERRORISTS IN THESE TWO GROUPS?

Varifrank does, and has written an excellent post titled "Agitators". It is a wonderful analogy comparing the "insurgency" in Iraq to the "insurgency" in the South after the Civil War, which was spearheaded by the terrorist group we know as the KKK.

What kind of person would turn their back on black people in the south?

It’s the same kind of person that thinks the insurgents are justified in killing American troops and Iraqi Civilians.