Neo-neocon has begun a multi-part post on Parents in War. In Part I, she focuses on Kathe Kollwitz, the artist, who lost her son in WWI and her grandson in WWII. Here is a little bit from the end:

Grief-striken parents are a tragic given in war. Whether they consider the sacrific worthwhile or not, the tragedy, as Kollwitz herself said, leaves a wound which will never really heal--nor should it.

But this sort of angry activism on the part of a mourning parent such as Cindy Sheehan seems to be a relatively recent phenomenon. What is driving it? Why are we seeing it and hearing about it now, as opposed to previous wars? My attempt to answer these questions will be the subject of Part II.

Go and read all of Part I. Kollwitz is a fascinating person to write about in comparison to Sheehan. I am eagerly looking forward to Part II.

Also, Michelle Malkin and the Anchoress both have pieces on Newsweek's description of Bush consoling grieving families.

Newsweek is certainly to be commended for this piece, which allows some little sense of balance to the manipulative, Michael Moore-ish production now going on in Crawford, Texas. Holly Bailey and Evan Thomas bring us an unflinching story, gleaned from interviews with grieving families who have met with President Bush. Some support him, some do not, but none of the families report the sick sort of joviality and cold indifference with which Mrs. Sheehan now charges President Bush. Because the president does not exploit the these people’s grief for politically expedient “photo-ops” (see how much he cares! Watch him bite his lip!) the press is always barred from witnessing the meetings.

Ask any real leader and they will tell you that one of the hardest parts of the job--especially in a war--is the burden of responsibility that one must carry for other's lives. It is not one taken lightly by a real leader; a real commander in chief. 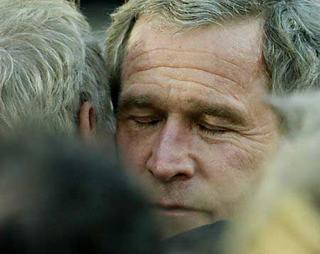 Having consoled many people and families after the death of a loved one myself--and this was when illness or disease carried off their loved ones; not as a consequence of actions that I initiated--I can tell you that it is draining, emotionally powerful work.

This little insight into the President, convinces me more than ever that he is a real leader who cares about the consequences of his decisions and is willing to take responsibility for them; but who is determined to do what is right and not what happens to be expedient. That denotes a person of character.

I honor him greatly for this.
Posted by Dr. Sanity at 9:59 AM