What passes for equal rights in Gaza. (hat tip: The Corner) 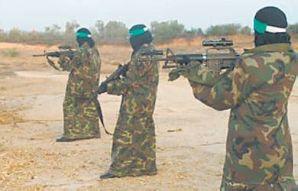 Hamas revealed over the weekend that dozens of women in the Gaza Strip have joined its armed wing, Izzaddin Kassam, and were preparing to carry out attacks on Israel.

According to Hamas, the women were being trained in planting roadside bombs, firing rockets and mortars and infiltrating Jewish settlements.

"Jihad has been imposed on all Muslims, males and females alike," one of the women explained. "This is particularly true in Palestine, and here we are obeying the call for jihad. We have the honor to compete with men in the jihad."

Sure doesn't sound like they are planning for peace.
Posted by Dr. Sanity at 10:21 AM