Every Day A New Outrage from the Left...

...and from the MSM, their enablers. For the latest, I will just direct you to LGF which has the links to someone who is on the verge of collapse because several counter demonstrators showed up to the Sheehan circus, and carried signs honoring Casey Sheehan saying "Freedom isn't Free" and "Casey Sheehan, American Hero". Their rage over this obvious insensitivity is palpable. One of the commenters even said that "Cindy Sheehan is more of a hero than her son."

If Cindy Sheehan is entitled to speak her mind, then why can't those who believe that her son's sacrifice should be honored? Shouldn't his choice to serve in the military also be honored? 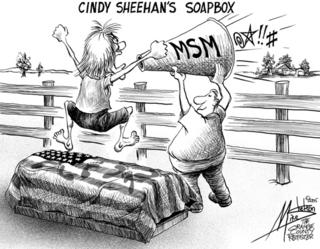 Instead, as many have noted, the entire event is being manipulated by the high priests of the cult of victimhood. I once felt sorry for Sheehan and could sympathize with her grief; but now she is just another priestess in that cult. My sympathy is with her son, whose memory is being dishonored in so many ways; and for all the other courageous soldiers whose service to our country is being trashed by these hysterical rantings.
Posted by Dr. Sanity at 4:30 PM