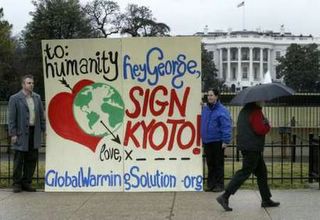 Yesterday's news photo above, showing protestors demonstrating outside the White House demanding that Bush sign the Kyoto Treaty, reminded me that I wanted to tell you about a good book I just finished reading.

The book is Michael Crichton's State of Fear, and it is a provocative and informative thriller--among the best of Crichton's novels (and he's had some good ones!) Crichton has always impressed me for his thoughtful, scientific outlook (read this speech Crichton gave at Cal Tech in 2003, for example).

The author has taken a controversial subject (global warming and the environment) and infused a fast-paced, absorbing, and thrilling plot with real facts and details from environmental science.

The entire environmental movement has become, IMHO, more of a propaganda machine than a real discussion of the scientific data and their implications for our planet. Environmentalism is now a big organization bringing in huge donations and famous spokespeople to plug its themes. And they have surrepticiously infiltrated many aspects of our lives. For example, one of my own pet peeves is how this same environmental movement thrusts "pop" environmentalism down the throats of kids in K-12 schools, thus ensuring an army of environmental drones for the years to come.

We think we know a lot about what is wrong with our environment, but Crichton shows us that we may be very mistaken in the many unsubstantiated beliefs that people accept uncritically. In fact, part of the interest of the book is that many of those beliefs are myths.

For that fact alone, I'm certain that many people will absolutely HATE this wonderful story. But the facts and reasoning that are used in the plot; as well as the copious use of footnotes from scientific papers, only enhanced my enjoyment of the story.

I guiltily admit I thoroughly enjoyed the part where one of the self-righteous hollywood pro-environment types was literally eaten-- in a rather guesome passage-- by cannibals in the jungle primeval. Poetic justice of the highest degree. You will also discover why signing the Kyoto Treaty is really a prime example of the idiocy of the entire movement(especially in the form espoused by the protesters in the above picture). I highly recommend the book for your reading pleasure!