Ayn Rand and Me

This month marks the Centenary of Ayn Rand. Rand had a profound impact on me, beginning when I was 12 years old and read The Fountainhead for the first time. Looking back, I remember the enormous emotional wallop of that book. My parents were in the middle of a bitter, angry divorce and I felt completely helpless and hopeless in dealing with the situation. What was going to happen to me and my brothers? Ayn Rand couldn't have arrived at a more opportune time in my early life. It would be years before I fully appreciated the intellectual acccomplishment of the The Fountainhead, but the "sense of life" projected by the main characters hit me like a freight train. It was the first time that I considered the idea that I WAS IN CONTROL OF THE OUTCOME OF MY OWN LIFE! Yes, I was a child, but my parents actions or inactions could not determine my fate. Only I could do that. I was torn up inside by what was happening to my family, but it wasn't my fault, and I could not take responsibility for my mother and father's actions. Nor did I have to let their rage and bitterness destroy my joy in life.

It was truly a liberating experience for a young girl on the verge of womanhood, and is probably the main reason why I naturally came to believe that I could do anything I wanted to in my life. It was about the same time that I first started thinking about being a physician. [My mother had hoped I would become a nurse. My grandmother took me aside and said, "Don't listen to her--you live in America and you can be a doctor if you want to!" My grandmother immigrated from Italy just before WWI, because--as she used to tell me- "Women didn't stand a chance to do what they want there." She had been disappointed in my mother, who had enormous artistic and musical talent, but who abandoned it totally when she married my father. Ayn Rand would have loved my grandmother].

Over the next few years I read Anthem, We the Living, and finally Rand's magnum opus--Atlas Shrugged. By the time I graduated from high school, I was a devoted fan. And I had begun to appreciate the philosophy of individualism and freedom that she espoused in her books, not just the emotional sense of celebrating life and happiness. One of my close friends at the time and I actually subscribed to her newsletter, and hoped to go to New York and take several courses offered at the Nathaniel Brandon Institute, which promoted her philosophy. I completely idealized her as a person and believed that she was one of her own heroes. On that I was soon to be set straight. I won't go into the details as Nathaniel Brandon has written extensively on that period of time, but it soon became apparent to me that Ayn Rand had a dictatorial streak a mile long. Apparently, one was not to sacrifice one's own thoughts and integrity to anyone--except her. To be part of her inner circle meant unquestioning obedience or face expulsion.

Thus Ayn Rand taught me a second, truly important lesson. You can judge a person by their behavior; but you must judge an idea separate from the person who conceives itor promotes it. Ayn Rand had many fine intellectual qualities and her ideas were brilliant. But as a person, she managed to wreak havoc in the lives of all the people who were important to her and came to betray her own intellectual legacy [I have come to learn that Rand probably used/abused amphetamines to maintain her weight, and it strikes me that this may have had a pronounced effect on her increasing paranoia and irritabiity through her life--especially her personal life. How she would have hated that if it were known to her! She, who espoused reason above all, was slowly having her reason eaten away by a drug she believed was safe!). I came to understand Rand as a flawed human being--brilliant, but not exactly one of her own heroic characters. And I was able to appreciate that a critique of her or her ideas was not a betrayal of reason, as some of her supporters maintain to this day.

As for her ideas! Her denunciation of totalitarianism and tyranny. Her brilliant defense of capitalism. Her emphasis on reason as man's primary means of survival; on "selfishness" as the right of all individuals, and her rejection of the idea of "a moral duty to subjugate others for the sake of some "higher" good, whether for the sake of Allah in the Middle East or for the sake of the "common good" in the West. Freedom cannot be spread abroad nor protected here at home without a moral defense of individualism and capitalism. " (here)

In my opinion, her ideas represent moral and philosophical foundation of "Life, Liberty, and the Pursuit of Happiness". She was not the only philosopher who contributed to the defense of Individualism and Liberty, but she was the first to defend it on moral and ethical grounds; and the first to see Capitalism as the natural extension of human liberty. "I am not primarily an advocate of capitalism," she wrote in 1971, "but of egoism; and I am not primarily an advocate of egoism, but of reason. If one recognizes the supremacy of reason and applies it consistently, all the rest follows."

I was fortunate to hear Rand speak just once while I was in college. When she died of lung cancer in 1982, it was a sad day for advocates of Freedom. Something she is reported to have said not long before her death was quite striking. She was talking about her own impending death, but rather than allowing death to be something that she passively accepted, she merely turned the concept around psychologically and claimed that death was the "end of the world"! Because of course, from her perspective, her death was the end of her world. 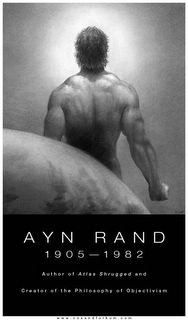