"In the beginning, there was nothing, which exploded". -Terry Pratchett

Pratchett was, of course, talking about the universe. I am going to talk about the Democrats, who will henceforth be referred to as the Party of Nothing.

For months, these nothings have yelled, screamed and demanded that the President do something new in Iraq; that he "change course". Never once during all the accompanying histrionics did they propose anything constructive, except the usual surrender/cut-and-run tripe, occasionally disguised under the rhetoric of "radical redeployment".

Apparently the only "course" acceptable to Democrats is retreat.

Not once have they suggested any other strategy to deal with the situation in Iraq--except to beg for some sort of diplomatic "help" from our good friends the Iranians and Syrians, and let them assist in quelling the violence--despite the fact that even a moron ought to be able to comprehend that Iran and Syria are the ones actually fueling it.

Then, when the President and his advisors develop something new with the object of achieving victory, the Democrats and their leftist base explodes with anger, rage, and the usual duplicity and meaningless posturing. They were for a surge before they were against it. They mimicked despair at the thought that the military was "stretched too thin" in Iraq to be able to deal with the additional problem of Iran; and prided themselves on how patriotic they were because they didn't believe professional soldiers should never ever have to risk their lives for their country--even as they blithly increased that risk for them by releasing classified documents and encouraging and abetting the very people those soldiers were fighting. This type of behavior they call "supporting" the troops.

Their fear, denial and paranoia are all palpable as they enable and provide constant entertainment for the jihadists in their high-tech caves; and as they provide legitimacy for the tyrants in their palaces.

Daniel Henninger has this to say (hat tip: Betsy):

Immediately after the president's speech, House Majority Leader Steny Hoyer said, "I heard nothing new." Nothing? When Gen. David Petraeus takes command of U.S. forces in Iraq, it will mark the start of an historic turn in military strategy in Iraq and perhaps in U.S. war-fighting doctrine.

The U.S.'s primary problem in Iraq, manifest across 2006, has been an urban insurgency in a 30-mile radius around Baghdad and in Anbar province. The Petraeus command is the overdue beginning of the counterinsurgency.

This isn't a one-off effort as at Fallujah, but counterinsurgency as daily U.S. military policy. It is the product of an enormous amount of self-criticism and analysis done by military and civilian analysts in and out of government. It does not mean, as often suggested the past 24 hours, that 20,000 U.S. troops are now going to run out and look for gun battles with insurgents in back alleys.

As Betsy comments, It is insulting to our military to dismiss this as nothing new. The U.S. military is far more professional and competent than the shrill leadership of the Democratic majority in Congress. And, they are far more aware of how "new" the proposals in the President's speech truly are. For one thing, the U.S. is finally taking off the gloves in dealing with Iran's activities in Iraq as recent events demonstrate. For another, the "political correctness" that has tied the military's hands behind its back on this mission has (hopefully) finally been abandoned.

Furthermore, the President has made it clear that the Iraqi leadership must stand up for the rule of law in their own society and demand that all militias (including Sadr's) be disarmed. America cannot be held responsible for the kind of ongoing moral toxicity that allows that leadership to deliberately ignore a new form of sectarian tyranny instead of freedom and democracy. Indecision and conflicted loyalties that lead to inaction is nonetheless a decision to embrace tyranny and welcome in the overlords from Iran.

In fact, the President has given the Iraqis a timeline and benchmarks to which they will be held accountable.

But the truth is that the Democrats and the left never intended at any time to go along with anything that Bush suggested. As Harry Reid so disingenuously pointed out the other day, he completely understands that it is the President's responsibility to set policy. Apparently he believes his own responsibililty is merely to carp, undermine and destroy anything that the President might suggest.

The Democrats have made crystal clear that their goal is nothing less than complete and total defeat and American humiliation in Iraq, which they mistakenly and eagerly seem to believe will be a defeat only for the President. They couldn't be more incorrect.

Iraq will not be the last theater of combat between radicalism and moderation, but wherever the next confrontation is -- in Lebanon, Egypt, Iran or Saudi Arabia -- the United States will be at an automatic disadvantage if it loses in Iraq.

It will be all the worse if the U.S. loses because Osama bin Laden is proved right in saying that the United States lacks the tenacity for any long and difficult struggle.

So, if there is any chance that the Bush administration can succeed in bringing security to the blood-soaked neighborhoods of Baghdad and in suppressing the Sunni insurgency in Anbar province, it ought to be given a last try.

But even after 9/11 and numerous terrorist attacks around the world, the Democrats and the left don't really believe in the reality of a wider war with Islamofascist jihadists, either. If only we could get rid of BushHitler and his evil sidekick, then all this nastiness would magically go away. Hence the knee-jerk hostile and negative response to the U.S. actions in Somalia the other day.

You can easily imagine these frail, demented old ladies of the left falling into a swoon if the U.S. ever takes decisive action directly against Iran to halt their nuclear ambitions once and for all. They will undoubtedly "forget" that they once acknowledged the threat that Iran posed to the U.S. and international community in the same way they have "forgotten" about their rhetoric concerning Saddam's threat when Clinton was POTUS.

...but wouldn't the honorable thing be for the Democrats as a party basically to say, "This administration has made tragic mistake after tragic mistake in Iraq. We oppose this surge. We don't think it will work. But we really, really hope it does work. We will give it a year and anything we can do at the margins to help make it work, we will."

But, they can't even let themselve hope that America could win in Iraq, when the only enemy they really care about remains in charge of the executive branch; nor can they permit themselves to actively do anything constructive to contribute to an American victory.

UPDATE: Yes, the Dems do always seem to want the US to move in a "new" direction: 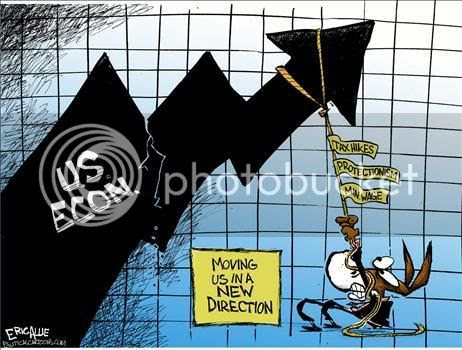 See here for other cartoons by Eric Allie.
Posted by Dr. Sanity at 3:13 PM