***Scroll down for updates on the game***

It's the fourth quarter with scant seconds to play; the team is behind and many want to throw in the towel. But, it is third down and yards to go for a first, and there is time for one last play. The ball is hiked; the President fades back, looking for an opening as the opposing team desperately tries to take him down before he can pass; but somehow he resolutely dodges them and manages to let loose a long, wide and nearly perfect bullet to the determined receivers far downfield.

It's a "Hail Mary" pass , but it provides the team with its only real chance at victory. Now, the ball is in the air and both sides are desperately pursuing it to either catch it and take it all the way, or to intercept it--depending on their ideological inclination toward the game.

The outcome of the game is up in the air, and the stakes couldn't be higher. Surprisingly to some, the President wants his team to win.

Which is much more than the opposition desires, as seen by their scramble to put in place a radically different field strategy: 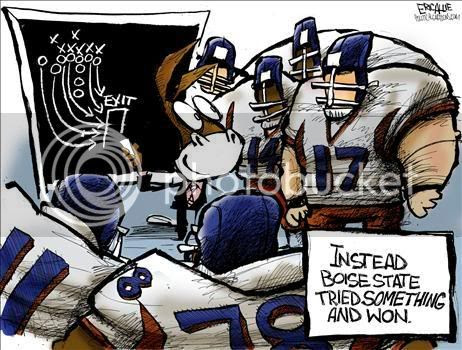 There's a chance to finally win this game...it won't be easy...it requires determination and grit and a desire to win. But there are many who are determined to stop the team in its tracks and give it all away, no matter the consequences.

I'm with the President on this--I'm for a home team win. I can deal with losing if it turns out that way, but I don't want the team--the best damn team in the world--to give up even if the stands are emptying. I want them to catch that Hail Mary, take it to the end zone, and win this sucker.

UPDATE: Siggy has some thoughts:

Germany and Japan were devastated by war, but that war was a byproduct of the devastation wrought upon those countries by years of tyranny. When the Second World War ended, those nations chose to arise from the ashes and rebuild themselves into free and democratic societies that have become ‘a lamp unto the nations’ of the world.
If the Iraqis fail to learn from the devastation brought upon them by the tyranny of Saddam and the war that rid them of the hated tyrant, they will have made a very different choice than the Germans or Japanese.

America and the west cannot be held responsible for the moral toxicity that embraces tyranny over freedom.

And Larry Kudlow at The Corner notes that the markets have given the Presiden a vote of confidence:

Amidst the expected chorus of pundit pessimism about the President’s new Iraq initiative, world financial markets are voting for Bush—not against him.

Yesterday, before the speech, stocks went up, while oil and gold both went down.

Today, when trading opened after the speech, stocks went up and oil and gold went down.

All three are political and war risk barometers. It’s a very important vote of confidence for Mr. Bush.

UPDATE II: This is excellent news that the President means business and that Iran and Syria better get out of the way:

Reports out of Iraq claim that US troops raided an Iranian Consulate, confiscated documents and arrested several people. While the news is dwelling on the rhetoric of Maliki telling the Mahdi Army to disarm and Bush's speech, in which he mentioned Iran and Syria, it at least appears the administration is intent on making this initiative one of action and not just talk. As many as six Iranians are said to be detained. Iran has summoned the Iraqi and Swiss ambassadors. They're displeased.

I'll just bet they are. Perhaps they should consider it a down payment on 1979.
Posted by Dr. Sanity at 8:44 AM