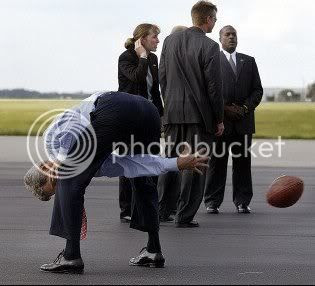 Political Correctness and Multiculturalism versus Holocaust remembrance; John Kerry versus intelligent thought (that's him conducting foreign policy in the photo); the left and Israel ---all this and more in the latest podcast from The Sanity Squad on Pajamas Media Politics Central !

You probably didn't know it, but there’s a movement afoot to make Holocaust remembrances more “inclusive;” especially in Britain, where the Muslim Council has been campaigning to replace “Holocaust Memorial Day” with “Genocide Day,” and proposing that the latter should include the so-called Israeli genocide against the Palestinians.

It's not too different from the campaign by some to be more "inclusive" in the 9/11 World Trade Center victim memorial, and it's all about laying claim the exalted state of victimhood (the only state the Palestinians apparently aspire to). It is also a blatant attempt to rewrite history, deny the Holocaust, and make it that much more acceptable to "wipe Israel off the map."

The Squad discusses the perks of victimhood, Kerry’s dissing of the US--a repeat performance from his Vietnam days; Carter’s attitude towards history, and the only cause the political left ever championed and then abandoned. For me, the highlight of our discussions was when Siggy-- responding to Carter's concern that the Holocaust Memorial Council had "too many Jews" on it--suggested somewhat sarcastically that, obviously to be completely "fair and inclusive" (i.e., politically correct), the Council should probably be composed of 50% Jews and 50% Nazis.

Join Neo-neocon, Siggy , Shrinkwrapped and me as we let it all hang loose, and say what we really think about the insanities of today's world. Check it out! We are equal-opportunity behavioral analysts--all insanity is a target in our podcasts!

Previous podcasts of The Sanity Squad can be found here; and you can also download them from iTunes. (search for Pajamas Media)

(The Sanity Squad cartoon at the right is drawn by Eric Allie, whose collection of political cartoons can be found here and here).

And I really must admit in the spirit of full disclosure that we really do NOT look like the people in the picture. ShrinkWrapped generally does NOT have his head encased in plastic wrap and Siggy does NOT smoke cigars (at least not when he is naked).

Sorry to shatter anyone's illusions. IT'S JUST A CARTOON, PEOPLE. And, sometimes a cartoon is just a cartoon.
Posted by Dr. Sanity at 8:05 AM