DOWN THE MEMORY HOLE

Oh, and while I'm on the subject, let's not forget what President Clinton and his infamous National Security Advisor had to say about Saddam and Iraq:

"If Saddam rejects peace and we have to use force, our purpose is clear. We want to seriously diminish the threat posed by Iraq's weapons of mass destruction program."-President Clinton, Feb. 17, 1998

"Iraq is a long way from [here], but what happens there matters a great deal here. For the risks that the leaders of a rogue state will use nuclear, chemical or biological weapons against us or our allies is the greatest security threat we face."-Madeline Albright, Clinton Secretary of State, Feb 18, 1998

"He will use those weapons of mass destruction again, as he has ten times since 1983."-Sandy Berger, Clinton National Security Adviser, Feb, 18,1998

It's all down the memory hole now. 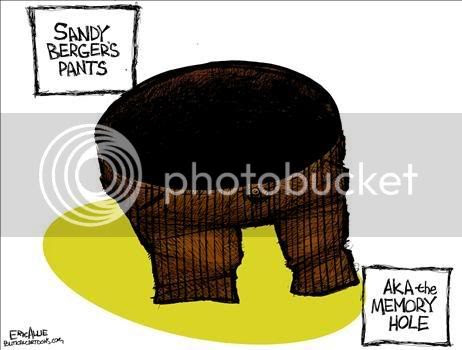 
(Sung to the tune of "Bette Davis Eyes)

His hair is Clinton-brown,
He never raves and rants;
He doesn't usually frown,
But look in Berger's pants!
He'll turn his sad song on you
And it's simple truth that he mocks;
He's just so absent-minded--
Look in Sandy's socks

He'll let you take him to court
But he will never recant;
He's safe in Clinton's fort--
Look in Sandy Berger's pants.
He'll take a tumble for him
He's not just any fall guy!
They all want you to think he's dim;
But why would Sandy lie?

He won't expose Bill, since he knows Bill,
And the wind and trash that blows Bill;
He'll ferociously deny it,
Though his actions sure belie it.
In his heart he thinks he's a jock--
But look in Sandy Berger's socks

And he'll steal them
To conceal them
He just doesn't want to reveal them
Cause history is his story
And it's bound up in Bill's legacy
He'll walk the walk and dance the dance--
Just look in Sandy Berger's pants.
Posted by Dr. Sanity at 12:09 PM