YOU SHALL NOT PASS

Tonight, President Bush will make his "State of the Union" speech to the American people before the joint houses of Congress. The President is not the most articulate of individuals, but his mind and heart are in the right place. He has reminded us repeatedly that we are in the middle of dark and terrible times; and that the actions we choose to take--or not to take, for that matter--will have serious, even devastating consequences for future generations of Americans and others.

We cannot simply close our eyes and pretend that the evil that is sweeping across the world will go away. Whatever accommodations the President makes tonight to the majority in Congress, he must not compromise on this issue.

The President has always been open to new ideas on how to win this war. He should never listen to those who only want to run away from it and have no new ideas except defeat. Defeat is not an option.

Never have the stakes been more clear.

And, just in time to highlight that clarity, Ayman Al Zawahiri, the vicious Al Qaeda thug-in-chief-- and the real-world manifestation of one of Tolkein's most evil and foul creatures--came out of his dark, dank cave yesterday and uttered more of the usual medieval Islamist nonsense. The Counterterrorism Blog has this to say:

The video appears timed to coincide with the State of the Union Address." SITE Institute: "Zawahiri taunts Bush, questioning: “why send 20,000 only - why not send 50 or 100 thousand? Aren't you aware that the dogs of Iraq are pining for your troops' dead bodies?.” He then invites the American President to send the entire American Army to Iraq as he believes the Mujahideen are capable of destroying the equivalent of ten armies."

UPDATE: Laura Mansfield has made the full tape with English translations available from her website (large Windows Media file).

This appears to be another in a long line of tapes in which Al Qaeda leaders concurrently warn the West and offer a mutual security "deal" - a complete lie and impossibility, of course, but Al Qaeda will continue to make the "offer." Daveed Gartenstein-Ross posted about this strategy in December, after al-Zawahiri used the Iraq Study Group report to offer another "deal."

As I listened to the tape, I realized that these creatures of Islam seem to believe that just because they are capable of using modern technology it make them "civilized". They are not.

They seem to believe that just because they are capable of mindless violence and murder, the future of the world is their for the taking. The day of the orcs is at hand. It is not.

Like all the Balrogs and Orcs of history, these ancient evils that arise in every generation from deep within the primitive, oppressive darkness of the human soul are frightening and represent the primitive darkness that we flawed beings are capable of. They once were human souls like you and I, but now their souls have been distorted almost beyond recognition.

But we can still identify them from the putrid smell of tyranny and death; sadly, all too familiar to our senses. Not a generation ago our fathers courageously battled creatures like this and routed them; sending them scurrying back into the darkness and away from civilized society. We told them "never again," and for a while our defiance and courage shamed them into silence.

While they have found a new path into human consciousness, their goals remain the same.

The deformed ideology that has resurrected monsters like Zawahiri and all the other two-bit thugs of Islamic delusion never seems to die for long. With every arrogant utterance these creaures make, every sane and civilized human being should recoil with revulsion at the stench.

We cannot run from what these creatures represent. This is our generation's battle in a war that goes back to the dawn of civilization. We must stand and fight whatever the consequences, for this evil must be sent back to the depths yet again.

Like Gandalf standing alone in the mines of Moria--even if we are the only ones that stand between this ancient human evil and the achievements of human civilization-- we too must resolutely declare, "You. Shall. Not. Pass."

That is the only declaration that will matter to me as I listen to the President's speech tonight.

UPDATE: Jules Crittendon cuts right to the heart of the problem, and makes a reasonable suggestion for the President tonight:

The State of the Union is a disaster. I did my best, but I made mistakes, and my best wasn’t good enough.

We went to war without building up our army, and now, I am trying to make up for that.

But that is not the disaster.

The disaster is that you, Congress and the American people, do not care to fight.

A picture's worth a thousand words: 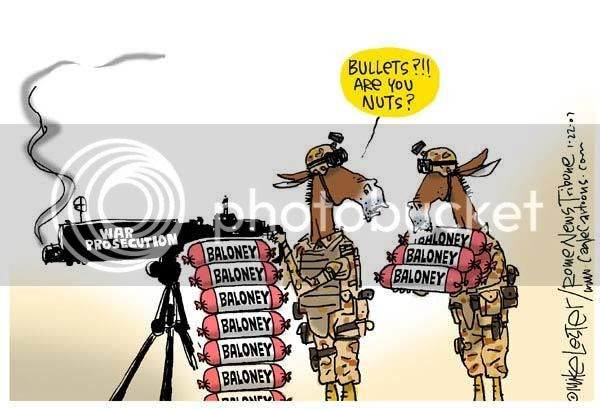