Symbolic of endings and new beginnings, in this first podcast of 2007, the Squad takes up the topic of Saddam's execution in Iraq.

Reaction from around the globe has been mixed — the Left, Europe, and human rights groups are indignant and screaming; Saddam's dead-enders in Tikrit and elsewhere aren't happy either. But many others — including the members of The Sanity Squad — think justice has been served at last.

Join Neo-neocon , Shrinkwrapped, Siggy and myself as we discuss the execution; justice for mass murderers, and the importance of instilling appropriate fear into the hearts of similar tyrants and murderous despots everywhere. As usual, the political left and their knee-jerk outrage and continued sanction and support of these sorts of mass murderers do not get off lightly from the Squad's psychological analysis.

You might also want to check out Neo's excellent post that picks up on some of what we discussed, "Don't Cry For Saddam and His 'Show Trial'".

Previous podcasts of The Sanity Squad can be found here; and you can also download them from iTunes. 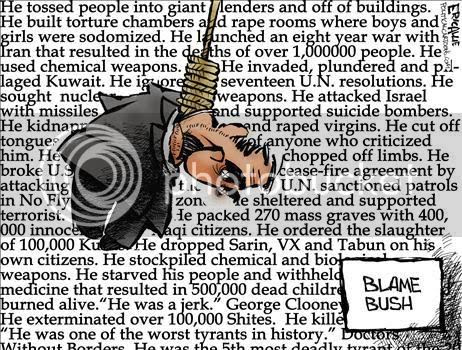 (The cartoon above, as well as The Sanity Squad cartoon at the right is drawn by Eric Allie, whose collection of political cartoons can be found here and here). And yes, we really do look like the people in the picture.
Posted by Dr. Sanity at 7:44 AM